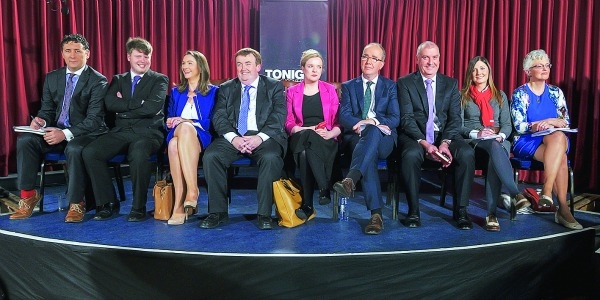 VINCENT Browne and his People’s Debate team descended on Dublin South West this week, and were met with a “lively” debate that placed Fine Gael at the centre of the audience’s wrath.

In fairness, at least the Fine Gael candidates turned up, unlike the Labour Party, and, despite being challenged on many of the issues raised by those present, Councillor Anne Marie Dermody and Cllr Colm Brophy engaged in the debate and stood their ground that Fine Gael had hard decisions to make, but in the interest of recovery.

Dublin South West is a vibrant, growing and diverse five-seat constituency which has around 145,000 constituents who live across communities in Tallaght, Firhouse, Knocklyon, Rathfarnham, Templeogue and Walkinstown.

There are people of all ages, cultures, interests and needs living across its expansive suburban and rural spread, many of whom were present on Monday in St Anne’s GAA Club when Vincent Browne came to town.

Before the filming commenced Vincent asked the audience to suggest issues they would like to debate. A range of topics was raised, not all of which were discussed in the show.

The underlying theme of the heated debate was definitely the constituency’s most vulnerable, with a homeless mother and a resident with an autistic child, who does not have access to services, speaking about their experiences.

Water was also top of the agenda, alongside health care, education, employ-ment and Garda resources.

The Fine Gael candidates did raise concerns over the make-up of the audience, which, from those who spoke, appeared to be heavy on AAA and Sinn Féin supporters – which created a warm audience for local TDs Paul Murphy (AAA) and Sean Crowe (SF).

However, as Vincent Browne pointed out, it was an open debate and he personally contacted the Fine Gael office to invite them to send supporters.

What was palpable on the night was anger. While some audience members questioned the lack of positivity during the debate, it can be argued that while there are many positives and future opportunities to living in Dublin South West, there are many individuals and families still struggling to feed their children, still struggling to get a decent paid job or pay their mortgage and hold onto their home.

Some may argue that the crowd gathered in St Anne’s on Monday night was not representative of the entire constituency, but one thing that was present was anger, the anger and frustration of the last few years is still present in communities – anger against austerity, the bankers and Fine Gael and Labour.

A number of people at the debate supported Fine Gael and Labour’s decisions in recent years and credited them for getting the country to a place of “stability” – pointing out the positives over the negatives.

Wherever your opinions fall, one thing for certain, well maybe not the date, is that there is a General Election looming, and hopefully the constituents of Dublin South West will use their voice in the ballot box to make the changes they would like to see in communities.