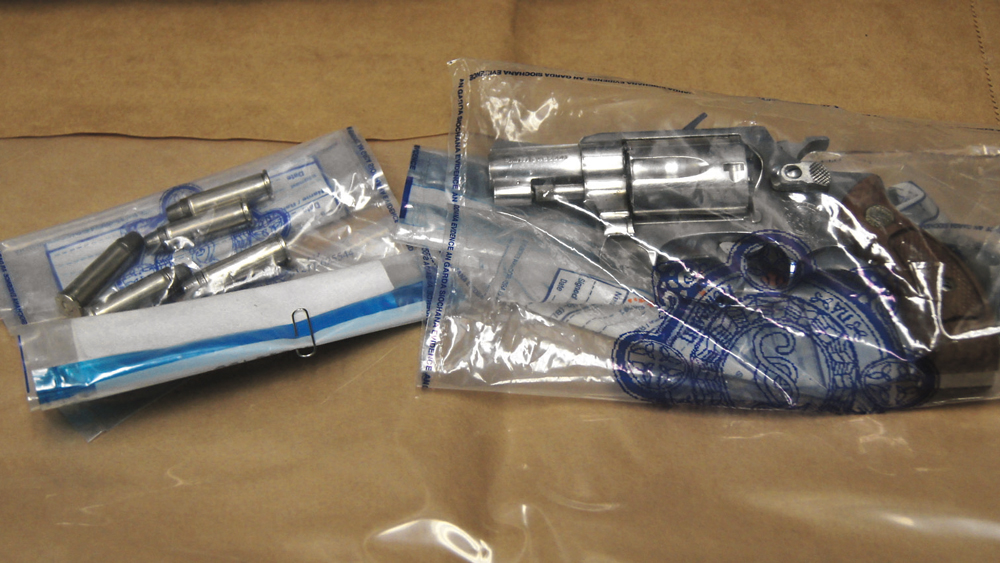 Gardai seized a .38 Smith & Wesson revolver and five rounds of ammunition Photo by An Garda Siochana

TWO men charged with possessing a loaded revolver after gardai intercepted two cars in Dublin have been held in custody.

Taxi driver Anthony Walker, 51, from Kingswood Heights, Tallaght, was granted conditional bail but needs to have €3,000 lodged before being released, while co-accused Ryan Kelly, 22, from Captain’s Road, Dublin, was refused bail.

Officers in the Garda National Drugs and Organised Crime Bureau (GNDOCB) arrested two men following the seizure of a firearm in the course of an operation on the N81 in the Tallaght area on Tuesday.

They were held under Section 30 of the Offences Against the State Act.

Gardai charged the pair with possession of the .38 Smith & Wesson revolver and five rounds of ammunition.

GNDOCB detectives John O’Rourke and James Doolin objected to bail due to the seriousness of the case.

The court heard it was alleged gardai observed Mr Kelly near his home placing an object in the taxi driven by Walker.

It was alleged he then got into a second car carrying three other people, which followed the taxi.

Detective Garda O’Rourke said they intercepted the taxi on the N81 and recovered the gun from the front passenger seat footwell.

Mr Kelly was a rear seat passenger of the second car which was also stopped. It was alleged there were snoods, rubber gloves, “burner” phones in that car, and a key to a third car later found in Springfield in Tallaght, with false number plates.

Boxes for the burner phones were allegedly found at Mr Kelly’s home. The bail hearing was also told he had been in contact with the taxi driver’s phone shortly before gardai stopped them.

Detective Garda O’Rourke said that the motive “still exists and that the end goal was not achieved”.

Counsel John Griffin (instructed by solicitor Padraig O’Donovan) submitted his client, Mr Walker, told gardai that he had not realised there was a gun during the trip.

He submitted that his client, a father of two, would abide by bail conditions and would reside in the Dublin 8 area.

Judge Cronin granted bail to Mr Walker in his bond of €1,000, but half must be lodged, and she required approval of an independent surety of €5,000 and half that amount had to be paid into court.

On taking up bail, he must sign on daily at a garda station, surrender his passport, not apply for new travel documents and have no contact with his co-defendant. He was remanded in custody with consent to bail on these terms and will appear at Cloverhill District Court this Friday, December 3.

Solicitor Niall O’Connor for Mr Kelly said his client’s mother had come to court offering to stand bail. He argued that it could be at least two years before the case was finalised. The solicitor added that the charges would be contested.

Pleading for bail, Mr O’Connor said his client had the presumption of innocence, was in a long-term relationship and had the full support of his family. However, Judge Cronin denied Mr Kelly bail and remanded him in custody.

He will face his next hearing at Cloverhill District Court this Friday, December 3.