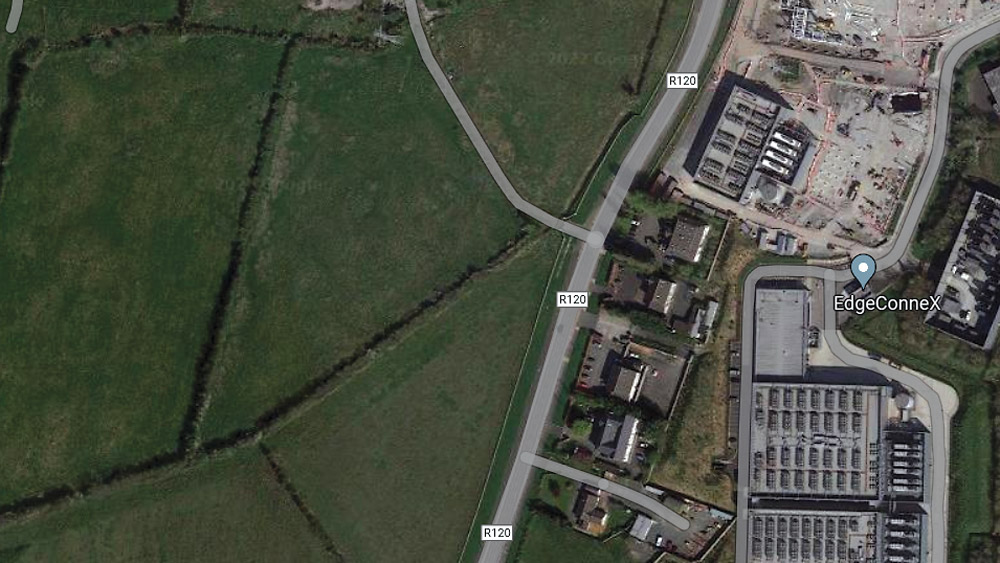 The site at Ballymakaily where permission is being sought

PERMISSION is being sought for the construction of two adjoined, single-storey data centres in the townland of Ballymakaily, west of Newcastle Road in Lucan.

The planning application was recently submitted to South Dublin County Council by EdgeConneX Ireland Limited, where the company outlined their plans for the two structures.

The two data centres include an associated office and service areas with an overall gross floor area of 15,274 sq m.

The plans include a single-storey goods receiving area/store and single-storey office area measuring 2,415 sq m, with PV panels above, located to the east of the data centres.

Provision of an associated water tower, sprinkler tank, pump house and other services forms part of the application.

The data centres will also include plant at roof level, with 24 standby diesel generators with associated flues, each 2-metres-high.

The standby diesel generators and flues will be located within a generator yard to the west of the data centres.

Permission is also being sought for a new internal access road and security gates to serve the proposed data centres, that will provide access to 36 new car-parking spaces and sheltered bicycle parking to serve the new data centres.

New attenuation ponds are to be located to the north of the proposed data centres, while green walls are proposed to the south and east that will enclose the water tower and pump house compound.

The development will also include ancillary site works, connections to existing infrastructural services as well as fencing and signage.

A decision on the application is due from South Dublin County Council by October 10.

Data centres have been a point of contention in the county in recent weeks, after plans for a moratorium on them in the upcoming County Development, which were voted in by councillors, were instructed to be removed by Minister for Local Government, Peter Burke TD.