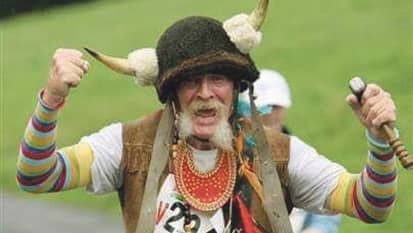 Unique character Jamsie was known for his fancy dress outfits

TRIBUTES have been paid this week to a unique character in Clondalkin – Jamsie Hempsey.

Mr Hempsey was known for his colourful fancy dress outfits, and a friendly face to all that met him throughout the years.

The Echo understands Jamsie actually passed away on April 4 after he had gone to Cork to be cared for by a family member, but news just filtered back to Clondalkin this week.

On Monday, Óglaigh na hÉireann tweeted their “sympathies to the family and friends of Gunner (Retd) Jamsie Hempsey.”

They said Jamsie competed in 35 consecutive Defence Force 10km races, and was “renowned in running circles for the elaborate fancy dress he wore whilst competing.”

Cllr Francis Timmons (Ind), a neighbour of Mr Hempsey in Cherrywood for many years was “saddened to learn of the death.”

“I knew Jamsie as a neighbour for many years and as chair of the Clondalkin St Patricks Day committee. He was delighted that the parade returned to Clondalkin and spent weeks sorting out his costume and shining his bike for the parade,” said Cllr Timmons.

“I gave Jamsie a framed picture of his part in Clondalkin parade in 2016 which he treasured.

The Clondalkin Patrick’s day parade won’t be the same without him. He was a legend around Clondalkin.

As a neighbour of his he will be sadly missed around Cherrywood. He was a character and you never knew what he would be wearing when he came out of his house, he was quite simply Jamsie the legend of Clondalkin.’’

Former Defence Forces member John McCormick tweeted Jamsie was a regular visitor to Casement Aerodrome Centre where he had his lunch most days.

“He was adopted by the Air Corps and if he didn’t turn up, Irish Air Corps personnel would check why. RIP,” said John.