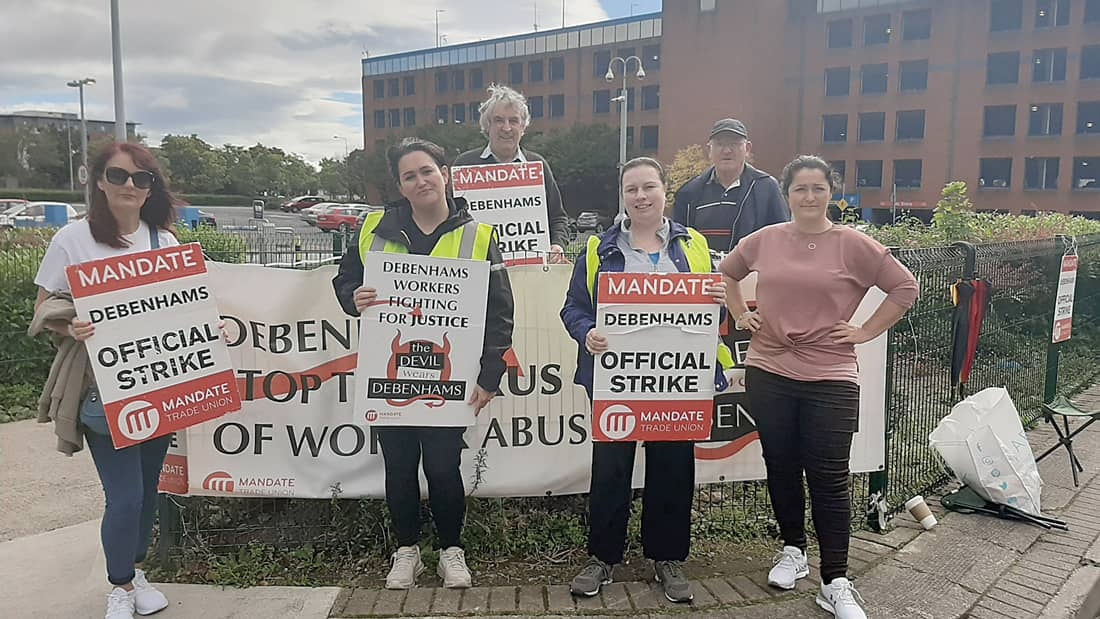 ‘Our priority is to protect stock’ – say employees

FORMER workers at Debenhams in The Square continue to picket at the carpark in Tallaght, in a last ditch attempt to prevent stock being removed from the store.

Workers spoke to The Echo at the picket on Tuesday feel the stock is the only way they will receive a “fair redundancy”.

Debenhams workers picketing outside The Square

“Our priority is to protect stock – it has gone on longer than we thought but we will make it difficult for KPMG (liquidators) as it is costing us money to be here,” said a worker at The Square.

Pickets got heated early on Tuesday morning when former staff at Dublin's Jervis Street and Cork's Patrick Street occupied the stores - with the Dublin staff removed by gardai and taken in a paddy wagon to Store Street Station.

Following this, liquidators for Debenhams Ireland KPMG withdrew a proposal to provide €1m in additional funds on top of statutory payments due to some 1,000 staff in Ireland who were laid off earlier this year.

However, former staff already blasted the proposal agreed between KPMG and Mandate Trade Union as “an insult to members”.

Former Debenhams staff have been picketing since they were let go on April 9, and Dublin members marched in the city centre on Tuesday.

The sit ins and ongoing pickets for over 154 days at this stage, are in pursuit of a “just settlement of four weeks redundancy pay per year of service.”

The cost of this additional claim is estimated at over €10m, but KPMG has argued that the company is insolvent and this funding is not available.

Taoiseach Micheál Martin weighed in on Tuesday, describing the treatment of Debenhams workers as “shabby, shoddy and unacceptable”.

He said all sides must get back around the table in order to bring about a resolution.

Former staff feel the Irish government has let them down badly and won’t intervene.

“Our only hope now is for the government to help us – the same thing could happen to other retail workers,” said members at the Tallaght picket.