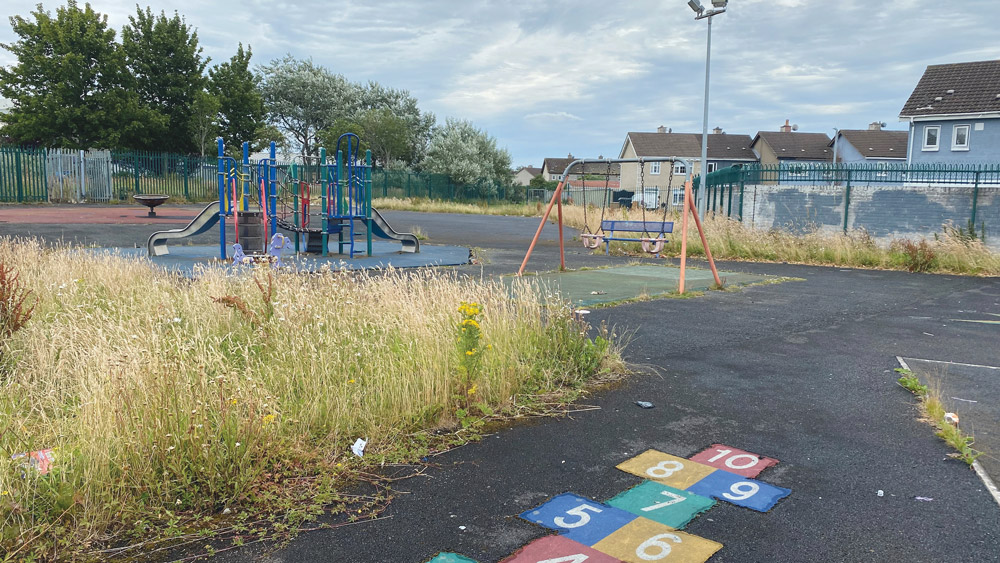 The playground beside Jobstown Community Centre and Citywise

A PREVIOUSLY well-used playground in Jobstown which has been unmaintained and has fallen into disrepair over the past year is symptomatic of a ‘neglectful attitude’ towards the area, according to a resident.

The playground, which is located beside the Jobstown Community Centre and Citywise, was maintained by South Dublin County Council before it was locked in 2020.

Since then, Bawnlea resident Noel Williamson said the playground has been unmaintained and children have been accessing it through a hole in the fence, posing a health and safety risk.

“The council has disowned the playground,’ claimed Mr Williamson. “They’re put two locks on the gates, the swings are all broken, and kids are getting in through a hole in the fence.

“It was a safe space for the kids to play, because it was away from all of the scramblers, and it was very well used.

“Children from Bawnlea used it, and children from surrounding estates like Glenshane and Suncroft would come over and use it.’

Mr Williamson’s two primary school-aged children also regularly used the playground before it fell into disrepair, and he said at one point there was a Portacabin where staff who maintained the playground were based.

The playground was used every summer by the children in Yemi Ojo’s social inclusion camp too, but is now unusable as a result of its current condition.

“Some of the swings are broken, and there’s weeds and dirt all around it,” Mr Williamson said.

“The council just don’t care – it’s like they’ve given up on it. I’d like to see the council tidy it up and maintain it for the kids.

“They do it for the playgrounds in Corkagh Park and Tymon Park, but they don’t do it in Jobstown. There’s a neglectful attitude towards Jobstown.”

A South Dublin County Council spokeswoman confirmed to The Echo that there are plans for maintenance works to take place, with a view to reopening the playground, while action will be taken to prevent children gaining access to it through the holes in the fence.

The spokeswoman said: “A review is currently being put in place for maintenance works at this playground. Once these works are carried out, the playground will be reopened.

“Work will be carried out immediately to close off the holes in the fence to prevent children gaining access to the playground.”