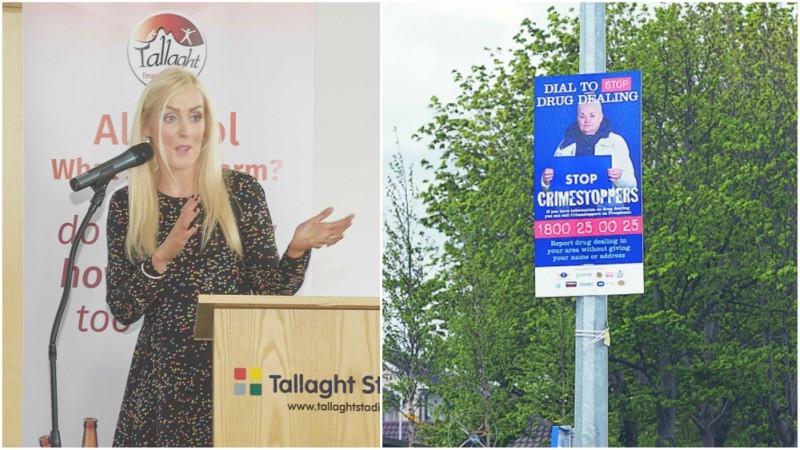 THE TALLAGHT Drug and Alcohol Task Force (TDATF) has described the community’s uptake of a Crimestoppers phone number to report drug-dealing in the area as “significant” and that there are plans to continue it into the new year, however the task force is still awaiting government approval for next year’s budget.

Last May, more than 200 Crimestoppers posters were erected across the area, encouraging residents to report any drug-related activity they see.

Over the last five months, 133 calls were made nationally to the Crimestoppers’ free and confidential phoneline regarding drugs – of these 44 were specifically related to drugs in the Tallaght area.

Grace Hill, TDATF co-ordinator, told The Echo: “It’s gained traction, people are seeing stuff and they want something to be done about it.

“I think it’s a fairly significant number of calls, we’ve invested greatly in promoting the phoneline and we think it’s value for money.

“The gardai are happy with the campaign and the level of reports that are being received as a result of it.

“The campaign has also increased the number of reports that [TDATF] has received directly.”

Commenting on the figures, Labour councillor for Tallaght south, Mick Duff – who is also the co-ordinator for the Community Drug Treatment Project – said: “On the face of it the Tallaght figures don’t look great, but really and truly the public are engaging [with the phoneline].”

Cllr Duff is also encouraging parents to “know what your children are up to – money doesn’t grow in a teenager’s pocket”, and that residents who “have doubts about people living beyond their means” should contact the Criminal Assets Bureau on 01 666 3266.

Cllr Duff added: “The task force is backing the Crimestoppers campaign . . . we want to keep the posters up and continue the campaign into the new year.”

However, the task force has yet to receive budget approval for the new year, a situation which Ms Hill has said has resulted in making it “very difficult” for the task force to plan for 2018.

She said: “The budget was in October, what’s the hold-up?

“Usually we’d have it by the end of November – it’s very late.

“We have a responsibility to our projects and to our staff, but our community service should be putting people on protective notice because we haven’t got the budget yet.

“The indication is that there’ll be no increase in funding, which is very disappointing.

“There’s no talk of restoration, which makes it really hard to stay positive and motivated.”

Cllr Duff said: “It’s reprehensible that we’re half-way into the last month of the year and we don’t have our budgets for 2018.

“The government is not letting us know if we’ll be getting the same money as this year, or if there’ll be cuts.

“We don’t know one way or the other, and that’s leading to great frustration within the task force.

“You can’t possibly run anything when you don’t know what funding you’re going to be getting.”

A spokesperson for the Minister of State for Health Promotion, Catherine Byrne, said: “Every effort has been made to protect the budgets of Drug and Alcohol Task Forces in recent years.

“In excess of €27.6m has been allocated to task forces by the HSE and the Department of Health for community-based drugs initiatives this year.

“It is intended that local and regional task forces including Tallaght will be notified of their 2018 allocations by the Department of Health and the HSE as soon as the HSE’s 2018 National Service Plan has been approved by the Minister”.