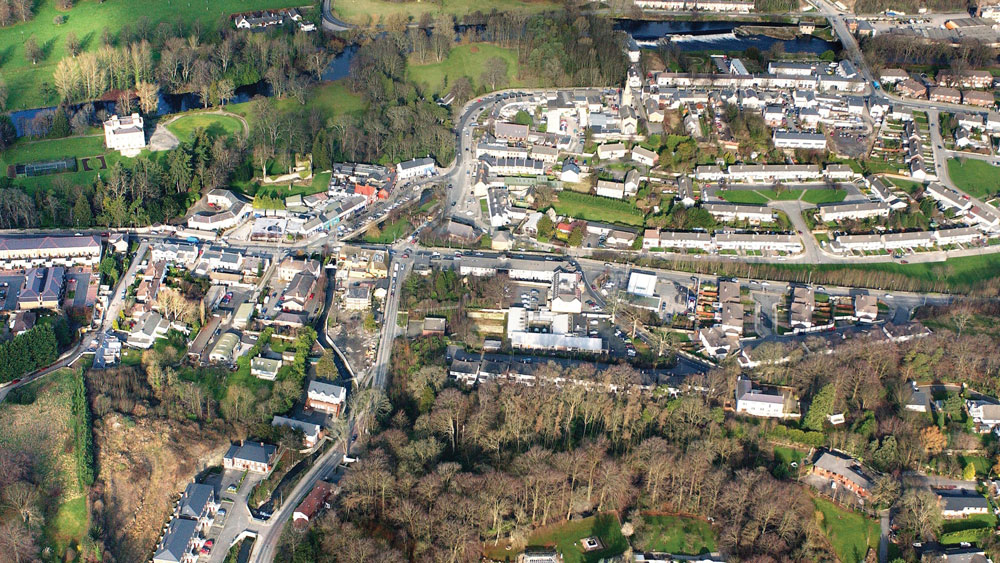 An aerial view of Lucan Village

LUCAN Village will lose millions in turnover and face the prospect of hundreds of job losses, should present proposals by the council for public realm works including the reduction of car parking spaces proceed, according to an economic report prepared on behalf of businesses in Lucan Village.

The extensive report, prepared by Dr Pat McCloughan, MD of PMCA Economic Consulting, on behalf of the Lucan Village Business and Services Group (LVBSG) and Health Alliance (HA), estimates loss of turnover in the Main Street area of Lucan Village due to the proposals to be €8,125,028 per annum.

Meanwhile, a traffic and parking report prepared by Martin Rogers Consulting Ltd (MRCL) on behalf of LVBSG and the Lucan Health Alliance (HA), finds that the Part 8 proposals as they stand will “decimate businesses in the area”.

The baseline turnover/spend due to customers accessing the Main Street area of Lucan Village by car per year is estimated at over €10.7m according to Dr Pat McCloughan’s report.

Plans have been in the works for over a year since Lucan was designated as a major tourism prospect by Fáilte Ireland.

“The council come along, and there is no cost-benefit analysis done by them. We had to do the costs, to find out the true cost of the project, find out the €8m and 300 jobs,” said Michael Boyle, Lucan Village Pharmacy and Secretary of LVBSG.

“That just hasn’t been accounted for in the plan at all and it needs to be, because these are local people working and coming into the village, that keeps it vibrant and it is being decimated.”

The potential loss of parking in Lucan Village is a massive topic in the area due to the proposals.

Up to 446 submissions were sent to the council ahead of the Part 8 deadline on the Village Green and Main Street.

At a glance, the first 50 submissions on the council website, has close to 75 per cent objecting to the plans – loss of parking the main issue cited.

One of the submissions by TD Emer Higgins (FG) said a local survey she conducted, found the removal of parking was the main concern, with 78 per cent of respondents stating it is already an issue in the village.

One key dispute has the council estimating there are 225 car parking spaces, while the businesses who work there cite just 126 spaces.

Up to 23 of the 225 spaces cited by the council are located in Lucan Demense, which represents at least 10 minute walk from the village.

Proposals are for parking spots to be loading bays until 11am, and pay and display after 11am, which local businesses blast as simply unworkable.

Another major point of contention is Main Street, which, according to the council’s Part 8 report, will see the loss of only 11 spaces.

However, the council proposal for Main Street includes the ‘provision’ of an additional 10 spaces, which businesses say will likely never happen, as some of these parking spaces were already taken away by the council for other reasons in recent times, and two of them are now a parklet outside Coffee Works. Four of the proposed 10 spaces are at a bus stop outside AIB, and the other four are further up the Lucan Road than the 100 metres stated in the council’s Part 8 report.

A Part 8 submission prepared by Hughes Consulting, on behalf of the Lucan Health Alliance, which represents 11 health based businesses in the village, said the removal of parking spaces is “inconsistent with zoning objectives which seeks to protect village centres and provide enhances retail and retail services.”

Health professionals in the village have been very vocal in their concerns that the loss of parking will affect vulnerable patients, an issue that is consistent among submissions by residents to the Part 8.