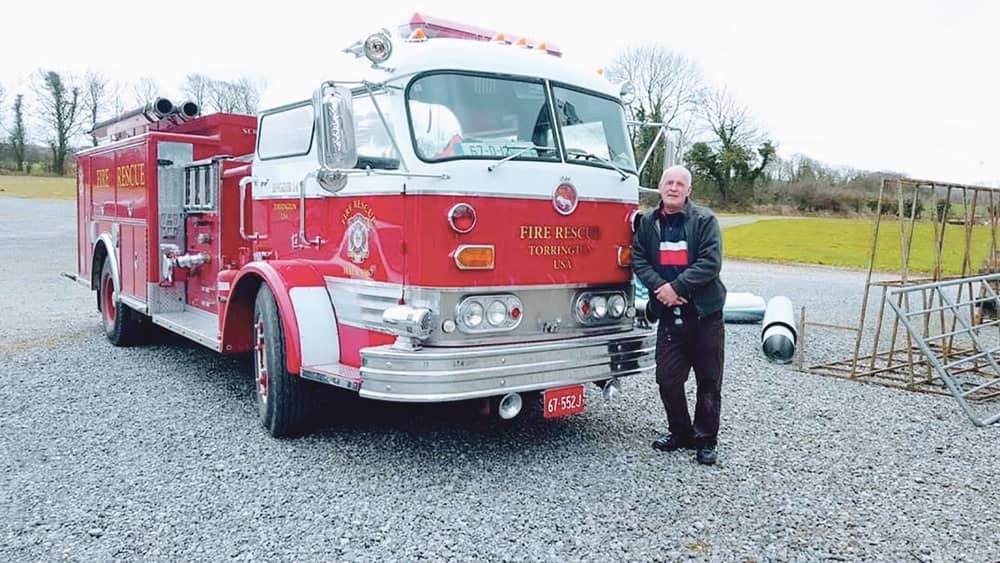 AN AMERICAN fire truck is making its way to Crumlin from New York after a local man bought it in an auction on Facebook.

Liam Moore from Crumlin has always had a passion for cars, and decided to buy an American fire engine shortly after his father Jackie Moore passed away in 2014.

The 1987 Seagrave tiller, which was used for over 32 years at The City of Glen Cove Volunteer Fire Department in New York gets a guard of honour as it leaves America

He purchased a 1967 Mack pumper from Torrington, a town in Connecticut and then went on to buy a 1970 Hahn pumper, from a Pennsylvanian town called Lebanon in 2016. Liam told The Echo that he had to take two feet off the side of his garden to be able to store the two trucks.

Liam’s newest and biggest purchase is a 1987 Seagrave tiller, which was used for over 32 years at The City of Glen Cove Volunteer Fire Department in New York.

“It was out of service and we bought it to bring here. I have two other ones there and this is the biggest one, its over 50 feet long and it has two drivers, one at the front and one at the back and 100-foot ladder- it’s big.

“There is nothing like it here in Ireland, or Europe and it’s big and unusual and that’s why I wanted it – unusual is what we look for. You don’t see them going around Dublin.

“It is in the docks at the moment, it only left. It’s in New Jersey, it’s sitting there at the moment waiting to go on a ship. The ships usually come in once a week and then it will be unloaded in Hamburg and put on a ferry there to come to Dublin”, Liam told The Echo.

Liam Moore standing at one of his fire trucks

The truck began making its lengthy journey from New York to Dublin on Wednesday, March 24, with a send-off ceremony taking place at the Fire Department. The procession received a full police escort from Glen Cove to the Port of Elizabeth in New Jersey.

John Weldon from Tallaght who is based in New York also played a big role getting the truck on its way to Dublin.

“It was on three news stations in America. They closed the tunnel there and they closed the Brooklyn Bridge for the truck to go through. They had a police escort the whole way to the docks. They also had a bike club that went with it as well.”

The truck is travelling fully loaded with equipment with the assistance of the Terry Farrell Firefighters Fund for firemen here in Ireland.

“We put the sticker on the door to show our respect to the foundation. The man who runs the foundation, his brother Terry Farrell lost his life in 9/11. They are a charity that give equipment such as uniforms, which are very expensive, to those who cannot afford it.”

Liam frequently displays the trucks at shows and parades for charitable causes, and says he hopes to do the same with his newest addition once Covid-19 restrictions are lifted. The truck will also be used for a 9/11 20th anniversary service in September.

“Most of the stuff we do is for charity with Dublin Fire Brigade and we do shows in the fire stations, we do our own charity stuff as well and shows, and I play with it the rest of the time.

“We have done Tallafest the last couple of years and we also did the Terenure Car Show.”

When asked where he will store his new toy, Liam told The Echo that it hasn’t quite been set in stone yet.

“We work the Midland American Auto Club, and Joe down there stores the trucks in the winter for us in Kilbeggen, Co Westmeath so we will have to see about this one.”

The truck is set to set sail in the coming days and arrive in Dublin mid to late April.