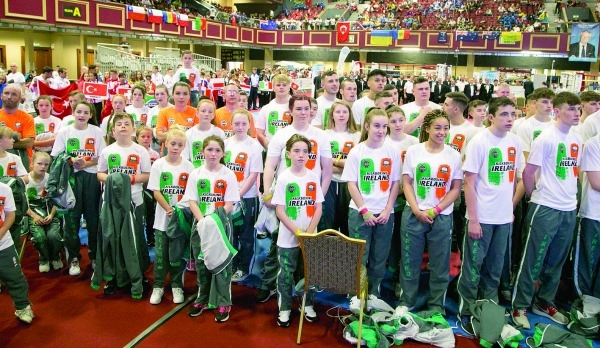 THE WAKO World Cadets and Junior Kickboxing Championships started on Tuesday with the opening ceremony in Citywest Conference Centre.

Running up until Saturday, the tournament sees some 3500 competitors, representing 37 nations, battling it out in various divisions.

It is the first time that Ireland hosts this event having provided the venue for the hugely successful senior equivalent last year.

And Ireland is one of four countries who are represented by more than 100 fighters with quite a number of them coming from the local Tallaght Martial Arts and Bushido MA.

The former will be fielding no less than 22 members with quite a number of them having already made the podium at this level.

Nathan Kelly is a silver and bronze medallist in points fighting while Nicole Bannon also finished runner-up in points and light contact at both World and European contests.

Adam Conlon has moved up to junior level for this week’s championships having medalled in both the Younger and Older Cadets class at this level.

And there are plenty more from the club looking for a return to the podium in the likes of Tola Adebisi, Rebecca Kelch, Conor McGlinchey, Kelly Morgan, Jodi Browne, Leá Farrell and the Smith brothers Luke and Adam.

Bushido Clondalkin are fielding five members including their World and European champion at 13-15 years division Karyna Nikitina who has stepped up a level.

She is joined by clubmates Luke Kelly, Shannon Gayson, Darragh O’Mara and Eoghan Gorman back on the world stage this week.

Also in action this week is Bushido Citywest’s Kim Doyle who contests the Older Cadets Points and Continuous sections.