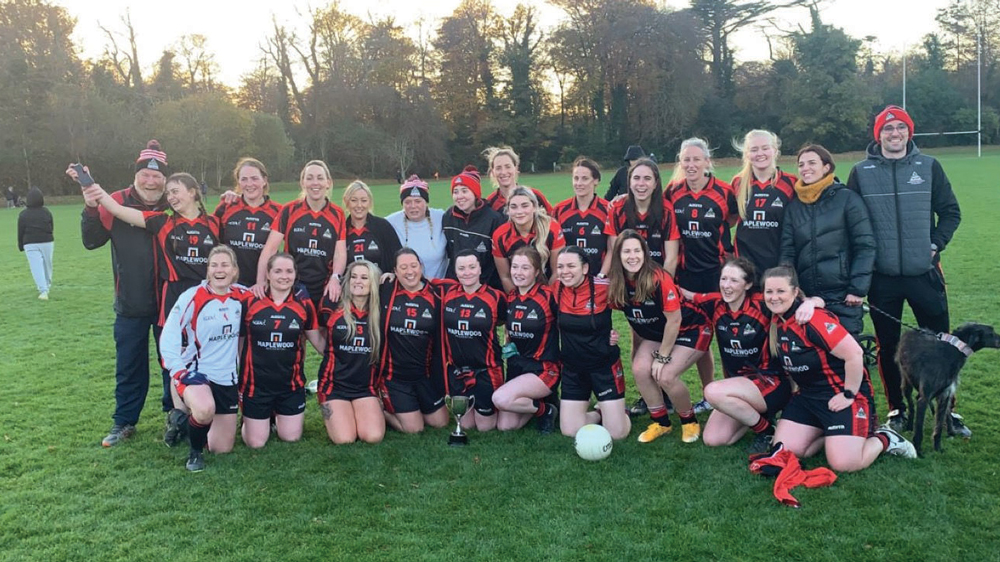 IT WAS Wanderers who prevailed in a hugely-entertaining battle with neighbouring rivals Ballinteer St John’s that saw them subsequently raise the Dublin LGFA Division Seven Cup in Marlay Park on Sunday.

Winning out 4-10 to 3-7, the Mount Venus Road side also managed to avenge their narrow loss to Ballinteer on score difference in the race for the league title earlier this season.

And it was Ballinteer who drew first blood at the weekend, hitting the opening score after three minutes before Wanderers responded through their industrious wing-forward Mary Gaynor who won two frees that were converted by Emma Murphy.

Anne Whelan added a point for Wanderers before a long range free from midfielder Caroline Conway dipped under the crossbar to leave Gerry Whelan’s side up 1-3 to 0-1 by the first water break.

They continued to tighten their grip on proceedings in the second quarter after some excellent inter-play between Conway and Maria Redmond put Whelan through on goal and she finished superbly to the bottom corner.

Whelan and Murphy then worked the ball through the Ballinteer backline to Danielle Valentine who finish cooly beyond the Ballinteer goalkeeper for the first of her two goals on the day.

Still Ballinteer responded with excellent work from Luisagh Guerrine who pointed from the right and pulled a goal back through Rebekah Fitzpatrick just before half-time.

But it was Wanderers who finished the half strongly through points from Murphy and Roscommon midfielder Conway that helped see them lead by eight at the interval.

Ballinteer shot out of the blocks in the second half and reeled off two quick points from the boots of Guerrine and Heather Bourke.

But Wanderers were not about to allow their opponents a sight of a route back in and responded with two points from Murphy following excellent work from Dionne Keenan and Valentine.

Guerrine and Bourke pointed for Ballinteer either side of a long range effort from Conway who tormented the Ballinteer cover all afternoon.

What followed was a mini-goal fest, with three goals in a five-minute spell as Ballinteer raised green flags through Bourke and Aisling O’Brien before Valentine bagged her second of the day.

Further points from O’Brien and Guerrine reduced the deficit, but that was as close as Ballinteer got to catching their neighbours, as superb defending from Conway, Kellie Gaynor and Karen White ensured the trophy was heading back to Frank Kelly Park for the second time in three seasons.