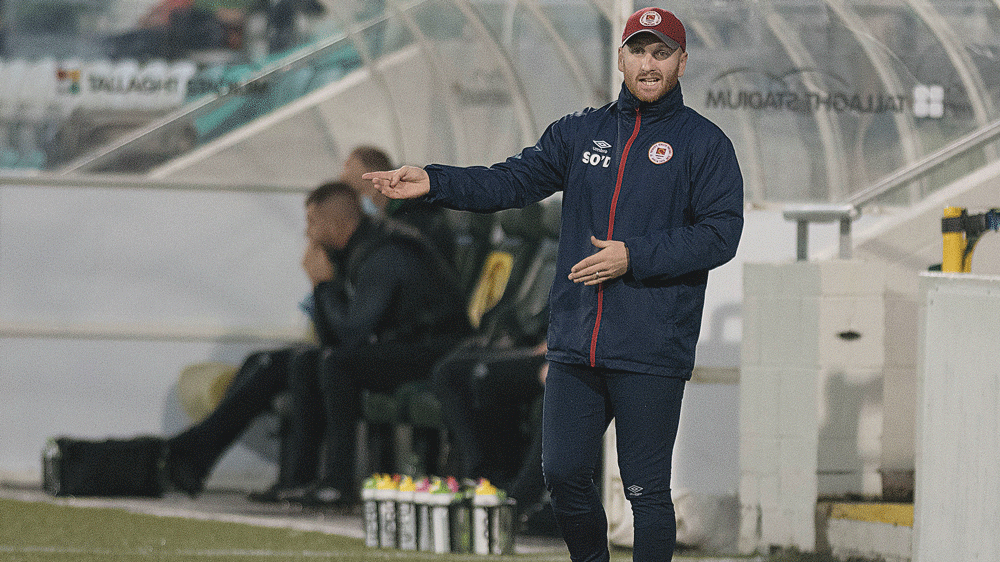 DESPITE seeing his side finish 10 points clear of Bohemians in this season’s SSE Airtricity League Premier Division, St Patrick’s Athletic head coach Stephen O’Donnell insists the Inchicore club’s FAI Cup final showpiece against the Gypsies at the Aviva Stadium on Sunday is a “50/50 game”.

Whereas the Saints finished in second after accumulating 62 points over the course of 36 top-flight games, Bohs had to settle for fifth spot on 52.

As understandable as it might be that his side are favourites amongst the bookies and the Irish soccer fraternity, O’Donnell pointed towards their league clashes throughout 2021 as evidence of how little there is to separate the two teams.

“Every game we played this season against them has been very tight” he stressed.

“We won a tight game at Dalymount 1-0. We scored a last-minute penalty here at Richmond to win 2-1. We lost 3-2 at Dalymount and only a couple of weeks ago we drew 2-2.

“The four occasions we’ve played this season have been very tight.

“We have seen in regards to their individual players what a good team they are. Sunday is going to be no different.

“It’s going to be two good teams trying to play football the right way and I think it will be an open and enjoyable game for the neutral. I think most people would have it down as a 50/50 game more than there being a favourite.”

Although this will be his first taste of an FAI Cup final as a coach, the Galway native has ample experience to draw on from his playing days.

In addition to winning the domestic crown with Sunday’s opponents Bohemians in 2008, O’Donnell also lifted the trophy with Dundalk seven years later.

He suffered agonising defeats to Cork City – another of his former clubs – in 2016 and 2017 and was still part of the squad when the Lilywhites finally regained the Cup three years ago.

Having sampled agony and ecstasy in almost equal measure on the biggest day in the domestic calendar, he is urging his players to go out and do themselves justice at the Aviva this weekend.

“Cup finals are all about on the day. It’s going to be fine margins” he insisted.

“Preparation is obviously important, but they take on a life of their own to a certain extent when the whistle blows.

“Just have no regrets, just enjoy it and obviously with that, work as hard as you can. Don’t look back on Sunday night saying, ‘If only we did this’. Just leave it all out there and enjoy it.

“There is no better buzz than running out in front of 35.000. The FAI Cup final is something we spoke about at the start of the season, having a good run in it and finishing off with the best game in the domestic football calendar.

“They have finished second in the league and have earned the right to go and enjoy the day and embrace it” he said.