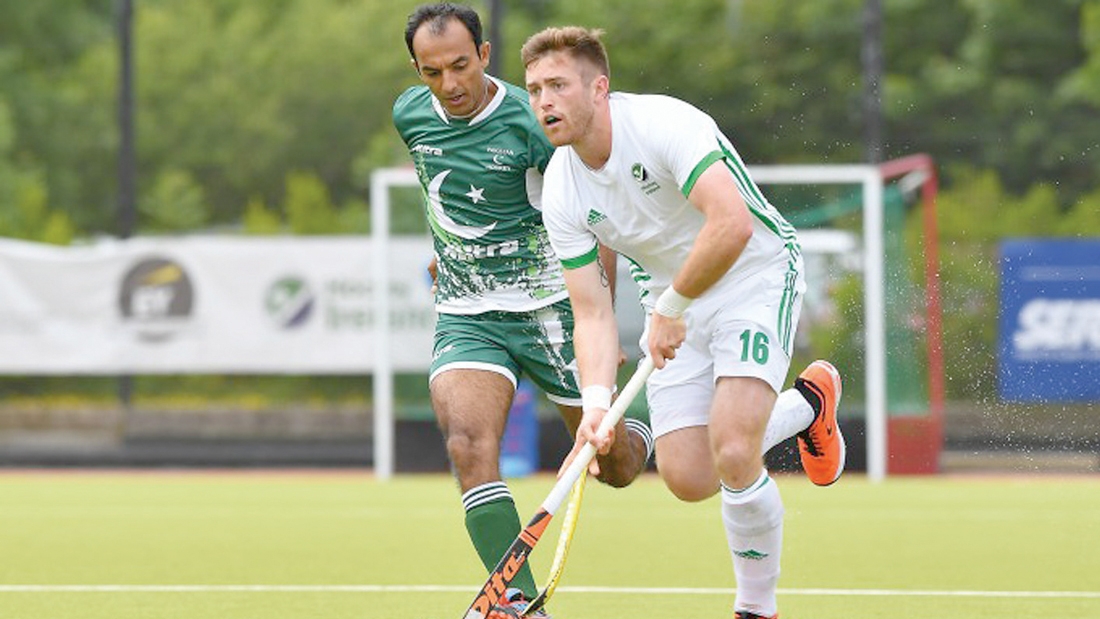 SHANE O’Donoghue has admitted being denied the chance to return to competitive international hockey has served only to prolong the pain of the Ireland men’s team just missing out on Olympic qualification.

The team was denied the chance to return to the Summer Games stage in Tokyo after losing out in hugely controversial circumstances against Canada in their Olympic qualifier in Vancouver back in October.

Shane O’Donoghue, while in complete agreement with the reasons behind the lockdown, feels being unable to return to competitive action has made it more difficult to recover from the pain of missing out on the Tokyo Olympic Games

Indeed the awarding of a penalty stroke in the closing seconds of their two-leg play-off after the ball had been run out of play, allowed the Canadians to restore parity at 6-6, forcing a shootout which they ultimately won in sudden death 5-4.

Knocklyon man O’Donoghue, who is Ireland’s all-time leading goal scorer, feels the scars of that experience have not been allowed to heal with the team being denied what little hockey they were scheduled to compete in this summer.

“Because we didn’t qualify, we weren’t going to miss out on too much, but we still had a fairly competitive and strong calendar for the summer” he told The Echo.

“We would have had some home series and friendly tournaments. It was something that I suppose would have helped heal the wounds from not qualifying for the Olympic Games.

“It’s obviously been very very difficult. We had wanted to take something good out of a fairly dark and grim situation and we had that opportunity taken away from us because the pandemic hit and lockdown was imposed, and rightly so.

“I suppose on one front, we’re well aware as an international group that what’s going on right now is far more important than anything else, including sport.

“But we haven’t had the chance to put it behind us properly and move forward and just try and start a new chapter, start that new journey.

“That’s obviously been the most frustrating part of it all, that you’re not able to put it behind you.

“And with the Olympics being postponed, from our point of view, it’s almost kind of keeping the band aid on for little bit longer and only being able to take it off in a year’s time.

“That’s probably tough from our perspective, but it’s probably even more tough from the perspective of athletes who were only a couple of months out from what was going to be their first Olympic Games, the Irish Women’s Hockey team for example.

“You have to feel for those athletes who were training extremely hard, getting themselves in the right shape physically, mentally, emotionally and then for it to be taken away is obviously difficult from their end. I can only imagine what they’re going through.

“From our point of view, yeah it’s been tough, but the guys are coping ok. We’re just trying to manage it as best we can, stay connected and then whenever we can get back on the pitch we’ll try and put Vancouver behind us and try and move forward.”

O’Donoghue, who is returning to his home club of Glenanne as Director of Hockey and Head Coach of their Men’s Senior team ahead of the new season, is also set to play a major part in Ireland’s bid for promotion back to the A Division on the European stage in 2021.

“For us, the European B Division is the next thing in our sights, to go there, perform well, win that and get ourselves back up into the A Division where we belong” he said.

“They are scheduled for after the Olympic Games, around mid to late August of next summer, so they should still go ahead because no teams in that competition will be in the Olympics if it goes ahead

“That is very much the next thing on our horizon and then before we know we’d be heading into a World Cup qualifier for early 2023.

“These cycles almost kind of roll into each other, they come in thick and fast so you need to be ready and, as much as it will hurt not going to Tokyo next summer, we have to close the book and we have to move forward and take something good out of a bad situation.

“Try and improve, try and move forward and try and do things way better than the way we did them in the past” he stressed.