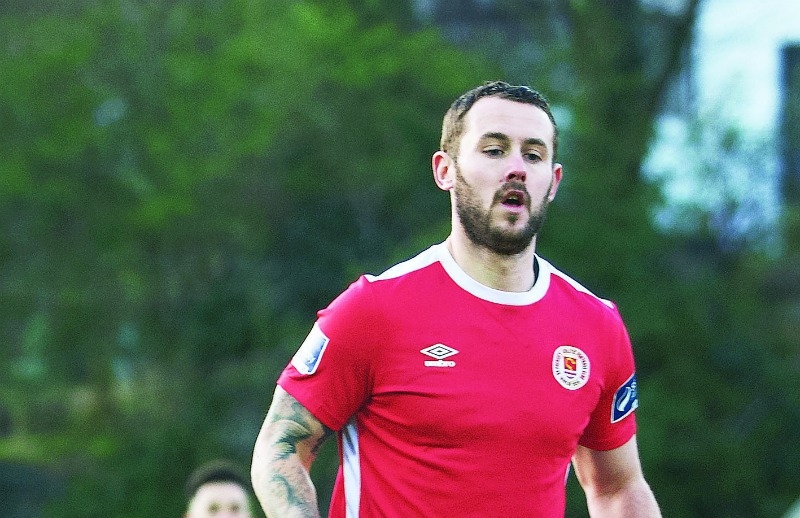 “We knew we had to get the win”- Byrne

KURTIS Byrne insists St Patrick’s Athletic were full value for their 2-1 victory over fifth place Derry City  which served to haul the Inchicore side out of the Premier Division relegat-ion zone on Friday night.

The Tallaght man was on target for the Saints with a penalty midway through the second half that cancelled out Ronan Curtis’ late first half score for Derry, before Graham Kelly served up a winner for the Saints 13 minutes from time.

The victory saw Liam Buckley’s side climb to tenth place in the table and it was a win they fully deserved according to Byrne.

“We knew we had to get the win” he told The Echo. “The table doesn’t lie and we’re at the wrong end of it.

“But we were confident even at halftime when we were losing.

“We had had the majority of chances. I think we created three or four in the first 20 minutes and they scored from a corner against the run of play.

“When we got the penalty I was confident I’d score it and then Graham got that goal around the 77th minute.

“We knew we still needed to hang on because we have conceded goals late on in other matches, but we managed to do that.”

The Saints will be hoping they can serve up another big home win on Friday night when they entertain third place Bray Wanderers.

The arrival of some experienced players like Killian Brennan, Jordi Balk and Owen Garvey has served to inject some steel into this Pat’s team and Byrne feels the new additions should serve the side well over the remainder of the campaign.

“Once new players come in, it gives everyone a lift and keeps everyone on their toes” he said.

“Killian Brennan has been around the league a long time and knows it inside out.

“Big Jordi [Balk] at the back takes no nonsense and kicks and heads everything out and Owen Garvey has a wealth of experience so hopefully we can keep pushing on and climb that table” he said.