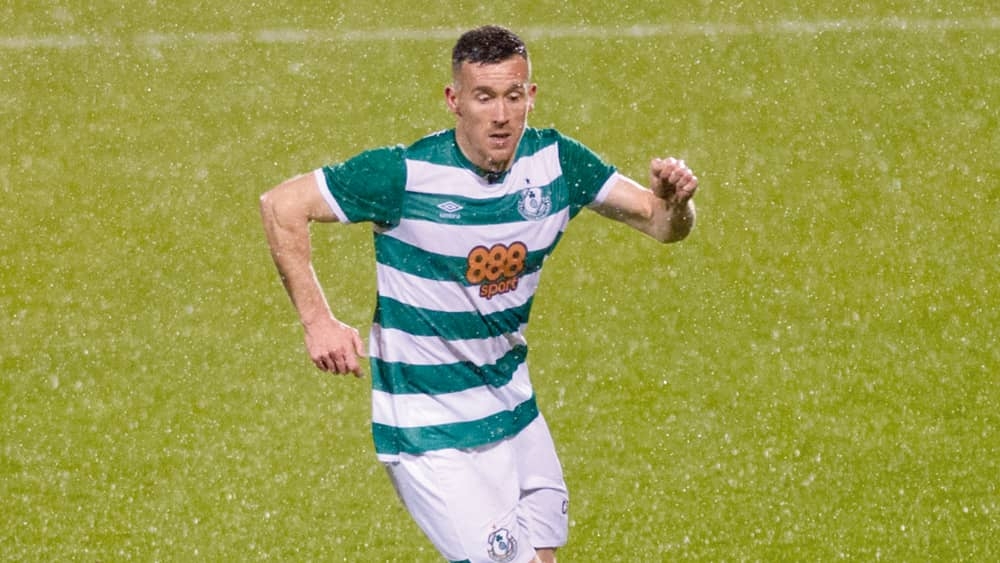 “We showed great character to get a point” – Greene

KILNAMANAGH man Aaron Greene was thrilled at the part he played in earning Shamrock Rovers a share of the points in their SSE Airtricity League Premier Division opener against St Patrick’s Athletic at Tallaght Stadium last Friday.

Sprung from the bench to replace Rory Gaffney at the fulcrum of the Hoops attack, Greene rose highest to head home a Sean Hoare cross on the right-wing with just over a minute of normal time to play.

Just two minutes earlier, the hosts had been staring defeat in the face courtesy of an own goal by the desperately unfortunate Roberto ‘Pico’ Lopes.

“To score on the first day of the season is always nice” said Greene. “It was a nice ball in from Sean and I just gambled. Got up early and that’s what you’re there to do. You’re disappointed not to start, but with this team, there’s going to be a lot of changes,”

“To be honest, I think a draw was a fair result. We’re just delighted not to lose the game. We showed great character to get a point. We’re just happy, first games of the season are always frantic. To get us up and running was good.”

The defending champions were originally set for an away encounter against Derry City this Saturday, but this has now been switched to Tuesday, April 13. While Greene would much rather be back in action this weekend, he acknowledged there is an upside to having some time off.

“It’s kind of like the kids going back to school with a COVID break and then they’re off for Easter. It’s kind of like that for us now, but hopefully Pico comes back [from international duty with Cape Verde] and he’s all good, but I think we’ve a few lads who have a few niggles.

“Maybe that could give them a little bit more time to come back, but as a player you want to play week in, week out. I think our next game is the following Friday against Dundalk. I’m sure the manager will have us playing a game against each other on Friday or Saturday.”

Tomorrow week’s showdown with Dundalk in Tallaght will see Rovers renewing acquaintances with the Lilywhites a month on from their President’s Cup duel at the same venue.

This game provided Greene and the remainder of the Hoops squad with a taste of what the County Louth outfit have to offer this year.

“I thought the game was quite even. I think if they stayed with 11, personally, I thought we would have gone on to win the game. They go down to 10 men and they make it that little bit harder for us.

“They were the ones who went out on top [in a penalty shootout], but there’s a lot of confidence that we can take from that. We get to watch Dundalk at the weekend [against Finn Harps] now also and keep a close eye on that game. One that we’ll look forward to next Friday,” Greene added.

NEWER POSTAre you looking to make your business more sustainable?
OLDER POSTRobert’s wish was to spend final days at home