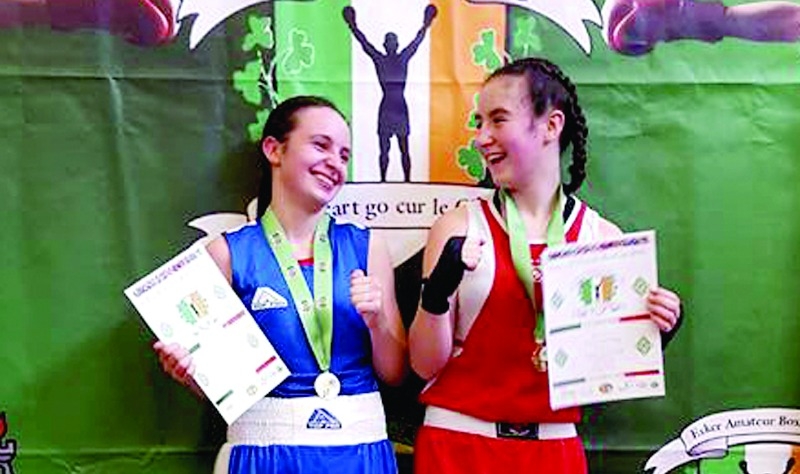 WHITECHURCH Boxing Club had a tournament to remember at the recent Esker All-Female Cup in CBS Sports Hall, Lucan, with both Megan Doyle and Kacie Delaney scooping top honours.

The prestigious tournament has been the largest all-female boxing competition in the world this year, with teams from Canada, Sweden, Holland, Poland and the UK all taking part alongside a huge Irish contingent.

Having come through a tough semi-final bout against fellow Dubliner Mollie Bennett of Bracken BC, reigning Dublin and Leinster Champion Delaney triumphed over a very game opponent in Jessica Flint of the Yorkshire Select team from England in the 52kg Final.

The Whitechurch southpaw started fast in the first round, landing a number of telling left hands to take control of the contest and silence the boisterous English supporters at ringside.

By the time the final bell rang out, Delaney had secured a 3/0 unanimous decision and, in the process her second consecutive Esker Box Cup title.

It was only Doyle’s second tournament since returning from a break from the sport.

And after four pulsating, heavy-hitting rounds, the fight was decided on a split decision 2/1 score for the Dublin boxer.

The club also had juvenile prospect Kyla Byrne in exhibition action over the course of the tournament and the young fighter gained valuable experience from her two skills contests.

To cap off a fantastic weekend for the club, the officials at the tournament voted Megan Doyle ‘Sen-ior Boxer of the Champ- ionships’.

NEWER POSTGlenanne get off the mark in Division Two
OLDER POSTREVEALED: How Tallaght Stadium will look with new third stand