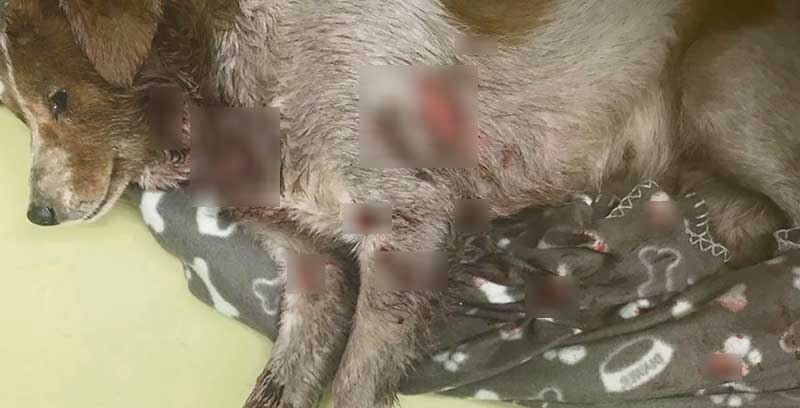 SECURITY guards saved the life of a dog that was attacked by a pack of wild lurchers in Park West on New Years Day.

The guards responded to a distress call from a passing motorist at approximately 3pm, and had to use their own vehicle to fend off the three wild dogs.

Wrapping the spaniel cross terrier in a blanket, they brought it back to Park West business campus and a call went through to Clondalkin Animal Aid (CAA).

Volunteers who run CAA said it was the worst case of animal abuse they have ever seen, which is saying something considering they routinely deal with some horrific cases of animal cruelty.

The incident left the spaniel with 26 separate wounds.

Rachel Johnston, from CAA responded to the call, and brought the dog to the vets immediately.

They christened her Hope, after she miraculously made a slight recovery and is now recovering in a temporary foster home.

“She is completely disorientated – still in shock,” said Rachel.

“The other three dogs were male, she is female and in heat, so it could have been that she rebuffed them. Unfortunately, she has no collar, we don’t believe she has an owner.

“We were lucky to get a Vet Patrick Condren in Terenure, as it was New Years Day and everywhere was closed, except for UCD but they are much more expensive. Patrick was great. He left a family engagement to stitch up Hope, gave her injections, antibiotics, bottles for us to clean the wounds and all at a great price. Also, I want to say thanks to the security guards for their bravery.”

A local source said the lurcher dogs belong to a nearby itinerant camp and are often seen chasing down rabbits.

CAA help animals in distress all the time, but they badly need foster carers for cats and dogs in their care.

Donations can be made to the group on PayPal at clondalkinanimalaid [at] hotmail [dot] com, or through Ulster Bank – account number: 73186184, sort code: 985025