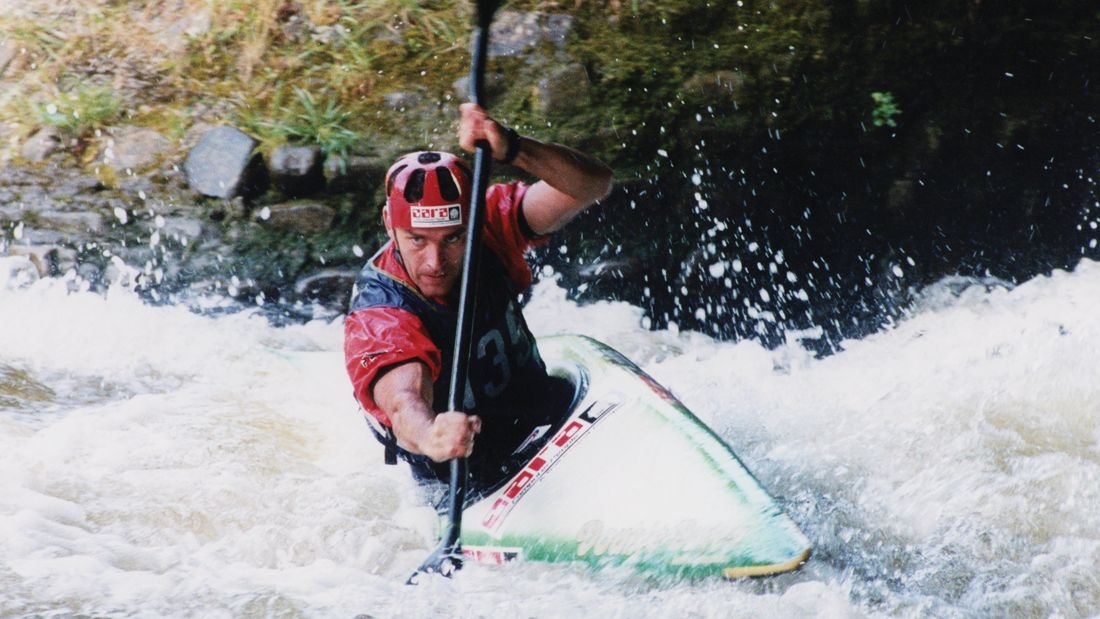 ONE OF Ireland’s greatest slalom canoeists Ian Wiley recalled the highs and lows of an amazing sporting career that saw him represent his country in no less than three Olympic Games and win gold at the 1996 European Championships.

Originally from Lucan before moving to Chapelizod, the Men’s K1 competitor was undoubtedly the leading light for Ireland in the sport throughout the nineties, his rise coinciding with the return of canoe slalom to the Olympic programme in 1992 following a 20-year absence.

Originally from Lucan before moving to Chapelizod, Ian Wiley was undoubtedly Ireland’s greatest slalom canoeist of the nineties, reaching three Olympic Games and winning gold at the ’96 Europeans

That career reached its peak in 1996 when he finished fifth at the Summer Games in Atlanta before continuing on to blitz the field at the European Championships in Germany that same year.

Although suffering his share of setbacks and disappointments in his 14 seasons on the senior international stage, Wiley was the indisputable star of Irish canoeing at a pivotal period, competing on the Olympic stage in Barcelona, Atlanta and Sydney.

“I guess it was a high point [for Irish slalom canoeing] in that we were consistently represented at the Olympic Games” Wiley told The Echo.

“It [the 1992 Barcelona Olympics] was a very exciting time, because our sport had been out of the Olympic programme since 1972. It was around ’88 time that the rumours were starting that we were coming back in.

“Coming into 1992, I was buzzing with confidence, but I got off to a slow start in the ’92 season. I had this little infection in my right knee which flared up about two weeks before the World Cup Series started, so it just didn’t get off to an ideal start.

“The early World Cup races didn’t go well, but then I won the last big race which was just about five or six weeks before the Olympics.

“So coming into Barcelona I was confident. Looking back on it, there was a lot of press at the time and there was a fair bit of attention coming on me as one of the main Irish hopes for Barcelona.

“It was a bit of a distraction. It is something I probably could have handled a bit better, but nevertheless, I was flying in training

“We had the official practice run one or two days before on the actual course which had been set for the race and I flew. I kind of just pulled up before the finish line so I wouldn’t record  a time and keep the time that I had had actually done a little bit secret.

“But we knew from all the videos and the splits that I was pretty much the fastest down.

“Then race day came around and it didn’t go to plan. I finished eighth which was extremely disappointing. My time in the practise run would have got me a silver medal.

“I was absolutely good enough to win that race, but it didn’t happen on the day and it took me a long time to get over it. My best at that course at that particular time, I knew was better that anybody else’s, but I just blew it.

“Even to this day, if I think about it too much, it still pains me. But then I’m very proud of the fact that I was sitting on the start line of an Olympic Games as one of the favourites.

“You try to analyse things and I think the expectation that was on my shoulders, it must have got to me in some way.

“My form dipped for a couple of years, but I came back and potentially 1996 was the year when I was actually in the best form of my life.

“A new coach came on board at the end of ’95, Marjan Strukelj from Slovenia, He was an ex-competitor of mine who had retired after the ’92 Games.

Marjan always had this massive belief in me as an athlete. I knew he was excited about trying to get me back on top form, so I pretty much gave full control of everything to Marjan in terms of my training programme which was something I hadn’t done before.

“It was just excellent. We spent that February and March [of 1996], in South America, in Chile for warm weather training.

“I was definitely training at a different level in terms of the quality and quantity of work we were doing and, coming off the spring, I just knew I was in incredible shape.

“We went into the first World Cup of the season in Spain and I won. I absolutely destroyed the field. I won the race by about five seconds which was just unheard of.

So it came to the Olympics and I was feeling really good and I was in third position after the first run in Atlanta and there was still time there.

“I was feeling pretty good about going into the second rounds, but the wind came up and nobody in the last 10 seeds improved, but a couple of boats who had gone a bit earlier had snuck in in front of me so I ended up in fifth.

“It was disappointing. I had narrowly missed out on a medal.

“But the big difference between 1996 and ’92 was there was still some racing to be done after the ’92 Olympics, but I just couldn’t even sit in a boat. I didn’t sit in a boat for about four months after Barcelona. I was so upset and disappointed.

“But I wasn’t going to do that again. Although the ’96 Olympics had been hugely disappointing to just miss out on a medal, I wasn’t going to waste all that work I had put in that year and I was going to try and finish the season strong.

“We still had some World Cup races to go and the European Championships in Germany. I demolished the field at the Euros.

“To this day, it was probably the greatest run I had ever done in a race. I won the race by a five second-plus margin again.

“My form that year, when it clicked, I was really fast. I was back in the top three World rankings, I had a couple of big wins and top five in the Olympics.

“My form dipped through ’98 and ’99. We had moved to Sydney in September ’99 and I was down there for about six or seven months.

“Training had gone well. I had worked on a new boat design with my boat manufacturer, but, for whatever reason, I just wasn’t feeling it. I wasn’t a 100 percent happy with the boat.

“By the time the Olympics came around I felt I was going really fast but I hadn’t had a race in that season that I was happy with and that’s never good for your confidence.

“I certainly didn’t have the same confidence in 2000 that I had in ’96. My form was pretty good, but you always need some results under your belt, you need them in the locker for that confidence and I hadn’t had them that season

“I was 12th in Sydney. That was the year I retired.

“It’s not until you’re retired and you look back and can evaluate things that I can say to myself what I did was pretty cool. I was very privileged to have led that life through the nineties, because it was an incredible time really.

“I travelled the world, I have friends all over the world, competing for Ireland, it was a great time.

“Eoin Rheinisch carried on in the Men’s kayak. Eoin was breaking into the team when I was coming to the end of my career, but I had a big input in helping Eoin in those early years.

“Eoin went on and did really well. He did three Olympics, Athens, Beijing and London.

“We didn’t have anyone in Rio and that was the first time we hadn’t got anybody, but we have a boat qualified for Tokyo, that’s Liam Jegou.

“Liam competes in the C1 class and is a medallist at Under 23 level. He’s a decent shot for next year, so we’re delighted to have someone back in.”

NEWER POSTNature on our doorsteps: Clickety-click
OLDER POST“When this all blows over, you’ll be stronger”- Coghlan