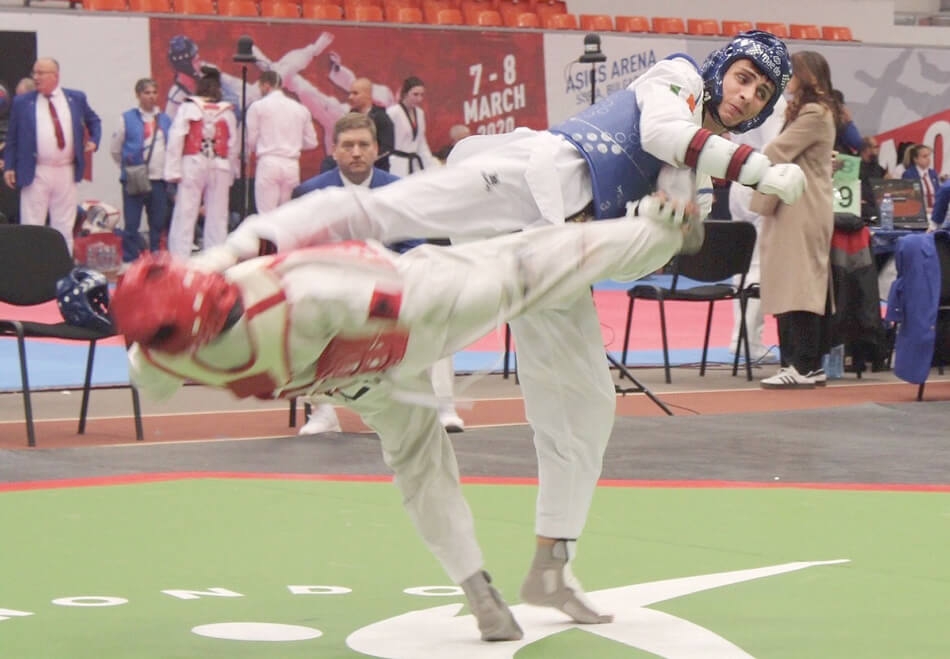 TOKYO 2020-bound Jack Woolley was back on top of the podium again when he lined out at the Sofia Open in Bulgaria.

The South Dublin Taekwondo star, only a week after landing gold at the US Open, set about doing the same in his latest advanced ranking event tournament which also saw his clubmate Emma Cahill secure bronze.

In the last eight, a disciplined 23-1 defeat of Christos Danilfis of Greece set up a semi final bout with lively Albanian Adieni  Bajrami.

That match was stopped midway through the second round as Bajrami had amounted 10 fouls leading to automatic disqualifi-cation, but not before Woolley had racked up a personal best score of 68-4.

Up against Grand Prix fighter Dionysios Rapsomanikis of Greece in the final, Woolley stormed into a 15-0 lead by the close of the first round after which he eased up, winning 18-7 for his second ranking gold in as many weeks.

Meanwhile, Woolley’s clubmate Cahill fought in four contests on her way to bronze.

That route to the podium included a 30-7 victory over Serbia’s Elena Radivojevic, an 18-12 win aginst Stefania Indra of Greece and a quarter final triumph over another Greek Sotiria Tsintsinou.

The young South Dublin Taekwondo competitor bowed out of the semi final following a 2-0 loss to Serbia’s Nina Stojanovic.

Also in action for South Dublin were David Phelan and Ryan Doyle who finished outside the medal positions in their Junior -55kg and -63kg divisions, while first time cadet Shauna Farrell secured a fifth place finish in the -47kg Female class.

The club also took the opportunity to field eighth members in a non-ranking contest run parallel to the Sofia Open.

SDTKD Head Coach Robert Taaffe, who saw his team top the cadet-age event, said “Sofia is the only event on the ranking calendar that has an event alongside for developing athletes.

“It has now become an annual event for our club as we have seen first hand the benefits for our up and coming athletes having the chance to travel with the experienced team, and with a couple of hard fought ranking medals they seemed to really relish the experience.”