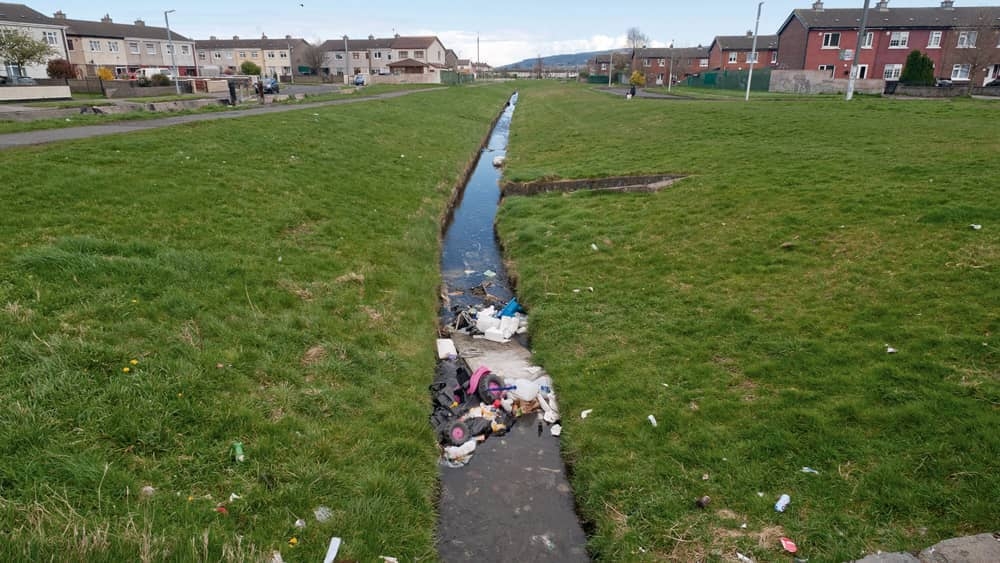 WORKS costing €680,000 are being proposed in hopes to counteract anti-social behaviour at Whitestown Stream in Jobstown.

Following years of ongoing issues with Whitestown Stream  such as illegal dumping and the burning of waste, South Dublin County Council have proposed actions in hopes to tackle these issues.

Back in January 2020, The Echo reported that a bathtub, drug paraphernalia which included a syringe and a couch were some of the items found in the stream when a clean-up was performed by volunteers.

There have also been incidences with stolen cars and scramblers which have angered and concerned residents and local councillors in the area.

The proposed scheme was outlined at a Tallaght area committee meeting on May 24, revealing the costings and plans for the area.

In the report, the council stated that it is intended that this process will lead to an agreement on measures that can be proposed for inclusion in the budget for 2022.

A car burnt out in the stream

A provisional sum of €100,000 has been added for other issues such as removal of graffiti, improvements to public lighting systems and securing boundary walls.

According to the report, the proposed actions include securing 1.01km of boundary, installing access control at 20 entry points and realigning boundaries of properties to remove hidden corners which currently facilitate dumping and burning of waste.

A new footpath is also proposed at Cloonmore, and to overlay existing footpaths which have been damaged by acts of vandalism.

There are also plans to remove the existing bridge linking Bawnlea Avenue and Cloonmore Road and replace it with two new bridges, one at either end of the stream.

The report stated that the main issue to be tackled is the lack of a secure boundary around the green area which adjoins the Whitestown Stream on both sides.

The provision of a 1.2-metre-high railing on top of the existing wall will hopefully prevent entry by stolen cars and scramblers, which have been a big issue of concern.

Planting is proposed of wildflower bulbs and seeds at an estimated cost of €20,000, with work to repair soft landscaping such as grass areas that have been damaged extensively by burning over the years estimated to be €20,000.

In the report, the council said that hard and soft landscaping will “increase legitimate use of the area, increase passive supervision in the area and thereby counteract the other main aspect of anti-social behaviour in the area which is the illegal dumping and burning of waste.”