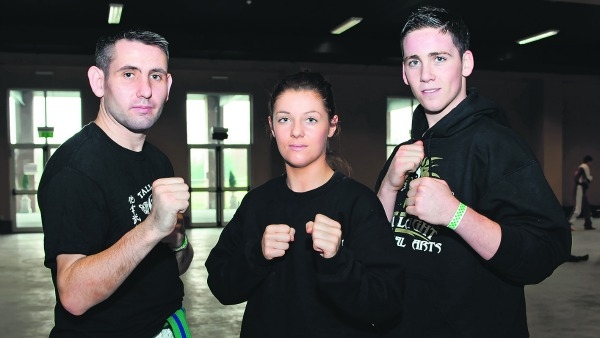 World’s top kickboxers are set to descend on Citywest

THE WAKO World Kickboxing Champion-ships comes to Citywest next week with the event involving more than 1000 international competitors, representing 40 countries.

The Lord Mayor together with Olympic Council of Ireland President Pat Hickey and Irish Sports Council CEO John Tracey will be on hand to help officially open the event on Tuesday morning.

Running right through to the following Sunday, the championships will see a number of local competitors in the hunt for podium placings.

Tallaght Martial Arts Dean Barry will be looking to defend his -79kg title while clubmate Shauna Bannon is hoping to follow up on her World Combat Games success and land gold on home front.

Bushido Clondalkin will field two fighters on the world stage next week in Derek Deegan and Jaide Gibbons.

The former will compete in the Men’s Vets Point Fighting -63kg division hoping to build on his impressive form at a number of top UK competitions.

Gibbons will be stepping in the ring in the full contact -60kg division where has competed in the past five years.

Thomas Hayden and Claire Louise Sweetman are likely to fly the flag for Bushido Palmerstown with the latter competing in full contact -70kg while Hayden will take his place in the Men’s Light continuous -84kg division.

Liam Dale of GRASP Martial Arts will meanwhile be hoping to follow up on his European Heavyweight gold with the same colour on the world stage at -94kg.

Such a wealth of home talent offers good reason to believe Ireland will make its mark on the global stage yet again.