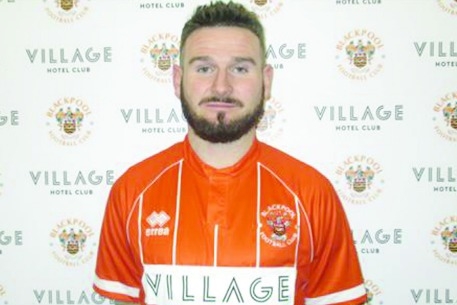 Yeates positive about latest move to League One side Blackpool

TALLAGHT’S Mark Yeates penned an 18-month contract with League One side Blackpool with the option for a further year.

The 30-year-old winger saw his short-term deal with Oldham run out and he was quickly snapped up by their divisional rivals.

“I was enjoying my time at Oldham and I was playing very well there” Yeates told The Echo.

“But it was a short term deal and there hadn’t been a lot of talk of a new one. Things were just dragging on then I got the call that Blackpool were interested.

“I spoke to the manager and the 18-month deal with the option of another year just gave the security that me and my family needed.

“It was a relief to get the deal done because I’d never been in that boat before, out of contract.

“This is a big club with a great history and while it has been a difficult last few seasons, behind the scenes there’s a lot of really good things. There’s a really good set-up there” he stressed.

The former Tottenham, Middlesbrough, Sheffield United, Watford and Bradford City lined out for his new team in their 1-0 defeat at the hands of Port Vale at Bloomfield Road on Saturday.

The loss leaves them still in the relegation zone, although just eight points separates them from Bury who are seven places ahead.

The Tangerines will be hoping they can haul themselves to safety when they play host to Scunthorpe this coming Saturday.

“We’re more than capable of pulling ourselves out of the bottom four and we could possibly do that if we get a win this weekend.

“I thought we were a bit unlucky not to get a draw on Saturday.

“Our home record has been quite good this season that’s why it was a bit disappointing that we lost, but we’re still only a point off the next two teams up.

“Hopefully I can start making a few assists and getting the odd goal. It will be great to get a win quickly after coming here. It’d be a big boost” he added.

While Saturday was not the most positive of starts to his Blackpool career, Yeates still remains confident of contributing to Blackpool’s campaign, having earlier told ‘Tangerine Player’ “I won’t shy away from things, I’ll always want to get on the ball, good, bad or indifferent, that’s one of my better traits.

“I’ve played a lot of games and been lucky enough to play for a lot of good clubs. I’m old and wise enough to know what League One’s about.”

“I had a really good chat with the manager, he’s very positive about the club going forward, and he wants me to be a part of it which is a nice feeling.

“Everyone’s plugging in the right direction so I want to come in and see if I can add a little bit to that” he said.

Both Blackpool and Oldham have not enjoyed the best first halves to the season, with the two sides currently finding themselves positioned in the relegation spots.

Joining Yeates in a carbon copy move has been the Latics’ top scorer so far this season Danny Philliskirk who has signed a two-and-a-half year deal with Blackpool.

Philliskirk, 24, has found the back of the net seven times and will be hoping to maintain that form.