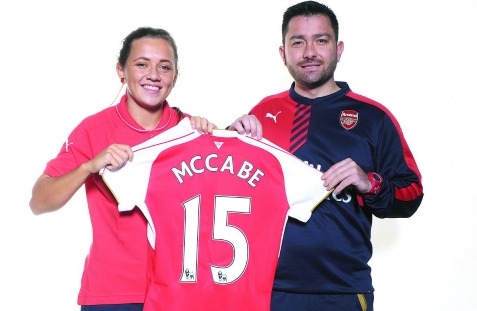 KATIE McCabe, this week, spoke of her delight in linking up with the most successful team in English women’s soccer.

The 20-year-old Kilnamanagh women recently penned a two-year deal with Arsenal and, this week, made the much-anticipated move across channel.

It is the latest chapter in the soaring career of McCabe, who has emerged as one of the hottest properties in Irish women’s soccer in recent years.

A National League and Cup winner with Raheny United, she also helped the northside outfit to the last 32 of the Women’s Champions League.

On the international front she played an intrinsic part in the Republic of Ireland’s march to the semi finals of the UEFA European Under 19 Championships in 2014 before making her senior debut early the following year.

Now about to fulfil a career-long ambition of playing Women’s Super League One football with one of England’s top outfits, McCabe is hoping to make an immediate impact.

“This is something I always dreamed about since I was a kid getting up to play on those cold Sunday mornings,” McCabe told The Echo.

“And being a girl, you didn’t see girls really making it. But I kept plugging away and what really drove me on was the support of my family.

“They kept encouraging me and bring me to matches.

“And then you had Irish women’s international football really kick-starting. Playing at this level helped me really improve because I was stepping up a level and fair play to the FAI for giving it that support,” she added.

McCabe, a highly-rated attacking winger/forward, is sure to bring a lot to the table for this Arsenal side which is serious about breaking back into the Women’s Champions League having been pipped to the last remaining qualification spot by Manchester City last year.

Along with McCabe, they have secured the services of former Goteborg and PSV Eindhoven midfielder Danielle van de Donk and England’s most capped player Fara Williams who joins the Gunners from Liverpool.

McCabe, herself, was the target of a number of British sides before she committed herself to Arsenal.
“I had spoken to Glasgow City,” recalled McCabe. “They gave me my first offer to move across the water. They were very good and had excellent facilities and I can’t fault them at all.

“I then went to Chelsea on trial and then Arsenal came in. Once I was talking to them Man City became interested, but I only spoke to them.

“I know a few of the girls I’ll be playing with there. Emma Byrne has been there for the past 15/16 years.
“I know I’ll settle in well so it’s really now a matter of doing a job on the pitch.

“These players, and the quality that’s already there, will make it a very strong team and it’s just unbelievable that I’ll be playing them all.

“Arsenal have been such an established club over the last 20 years. Since I was a kid I remember watching them on TV in the FA Cup, and the likes of Casey Stoney.

“Now I’ll be playing with them and it’s unbelievable. Hopefully I can learn from them and bring some elements of their game into mine and continue to improve,” she said.

It is a busy start to the new year for McCabe who begins pre-season training with Arsenal this week, just several days before she heads out to San Diego with the Ireland senior team for a training camp that will feature a match against world champions USA.

Sue Ronan’s side resume their bid to qualify for the Euro 2017 Finals when they take on Montenegro away on April 7.

The team is currently sitting fourth in Group Two after picking up one win from their opening three games of the campaign.

Reflecting on their qualification quest so far McCabe said “We lost to Finland [2-0], but I thought that was one of our better games.

“We were just unlucky with the two goals that we conceded and we didn’t take our chances.

“That was how we felt when we played Portugal away. We were 1-0 down but then came back to beat them 2-1.

“And then we played Spain who are an amazing team and they beat us [3-0]. I was out for that match having picked up an injury in the game against Portugal.

“I still think we have a good chance [of qualification]. We have a few home games remaining and the support that we’re getting in Tallaght and from all the schools cheering us on is a real great boost,” she stressed.

With the eight group winners and six best runners up progressing to the final tournament, McCabe and her Ireland team mates know they will have little room for error over the remainder of their qualification campaign.