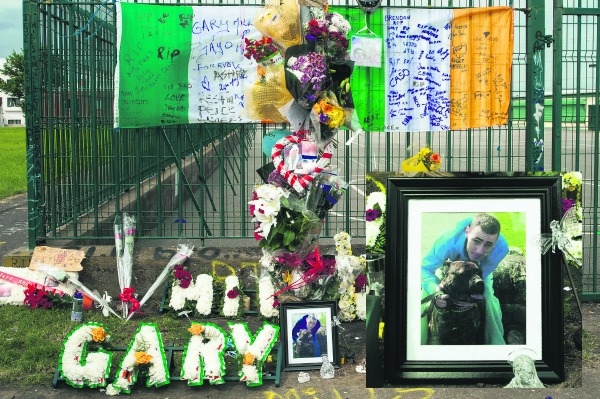 A 24-year-old man died after a stolen motorbike he was driving crashed into a lamppost on an estate green area.

Gary Miller of St Dominic’s Court, Tallaght, Dublin 24 was propelled into the lamp post in a ‘bear hug’ fashion after the handlebars of the motorbike clipped the lamp post.

Dublin Coroner’s Court heard that the Gardaí responded to a call at 7.30pm on May 24, 2014 and that paramedics were met with a large and almost hysterical crowd of up to forty people on the green behind the Homelawns estate in Tallaght.

Garda Maria Doran said she was called to the scene of a motorbike accident but when they arrived at the green area behind the Homelawns estate there was no motorbike or helmet to be found.

“The call came into us about a man who had fallen off a motorbike. When we arrived there was no sign of the bike or helmet, just Gary lying on the footpath by the lamppost,” Garda Doran said.

The bike had been removed from the scene and was later found burned out in the Ballymount Industrial estate. The court heard Gary Miller had been riding the bike for about a minute before the accident.

Garda Susan Kinsella said it was not known how Mr Miller had come into contact with the modified Suzuki racing bike, which had been taken from its owner’s yard in Rathfarnham, where it had been bolted to the wall and triple locked.

When emergency services arrived, Mr Miller was agitated, trying to get up off the ground and complaining of difficulty breathing.

Garda Kinsella said witnesses told how the left handlebar of the bike hit the lamp post.

“Gary Millar was propelled into the lamp post in a bear-hug style and hit the pavement. The helmet came off when he hit the pole. Three youths came and took the bike from the scene,” she said.

He was rushed to Tallaght Hospital and went into cardiac arrest on arrival. He was pronounced dead at 8.57pm.

Mr Miller sustained multiple rib fractures in the crash and the cause of death was multiple traumatic injuries. The jury returned a verdict of death by misadventure.