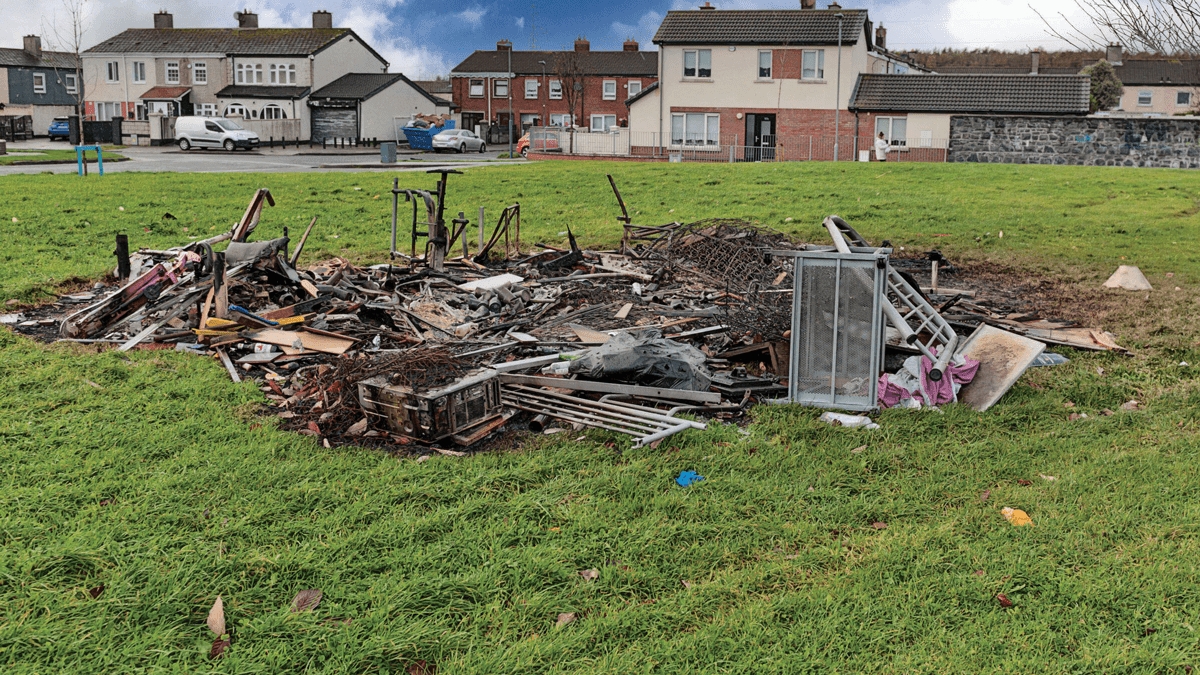 MORE than 236 tonnes of material was collected by South Dublin County Council in the week leading up to Halloween, with the local authority now starting to survey and map all bonfire sites across the county.

It is yet unknown whether there is a decrease or increase on the 226 bonfires lit across South Dublin County last year.

A bonfire site in Fettercairn

As previously reported in The Echo, the total cost of dealing with the aftermath of the 226 bonfires in 2019 was expected to cost South Dublin County Council in the region of €150,000.

This year, the council was once again out in communities with local gardai in the lead-up to October 31, removing stockpiled material before Halloween.

In a comment to The Echo this week, a council spokesperson confirmed that 236.7 tonnes of stockpiled bonfire material was removed from communities between Monday, October 26, and Saturday, October 31.

Some 61 tonnes of this material was cleared on Halloween.

As Halloween fades into Christmas, the council is now faced with the task of clearing bonfire sites and re-instating green spaces.

A bonfire site in Jobstown

“Surveying and mapping of bonfire sites is underway and should be completed this week”, the council said.

“Clean-up of sites has also commenced and will take two to three weeks to complete.

“Sites requiring reinstatement of grass areas will be attended to in 2021, when ground conditions allow.”

In relation to activity on Halloween night, Tallaght District Superintendent Ian Lackey, who managed the Public Order Unit assigned to the whole of Dublin city for Halloween, said that levels were similar to last year – up until around 12pm.

“Up until midnight, there was the same level of activity as last year”, Supt Lackey said.

“It was definitely as busy as last year but it quietened down after 12pm.

“There was nothing significant across local communities.

“There is always going to be fires but there was no significant fires or damage.

“There was a little bit of anti-social behaviour.”

While members of the Public Order Unit were patrolling all communities across the city, Supt Lackey said that they did not have to be deployed into the Tallaght area for any specific incidents.

“I want to thank people for acting responsibly in relation to Covid, overall the night was definitely quieter, with no major incidents.”