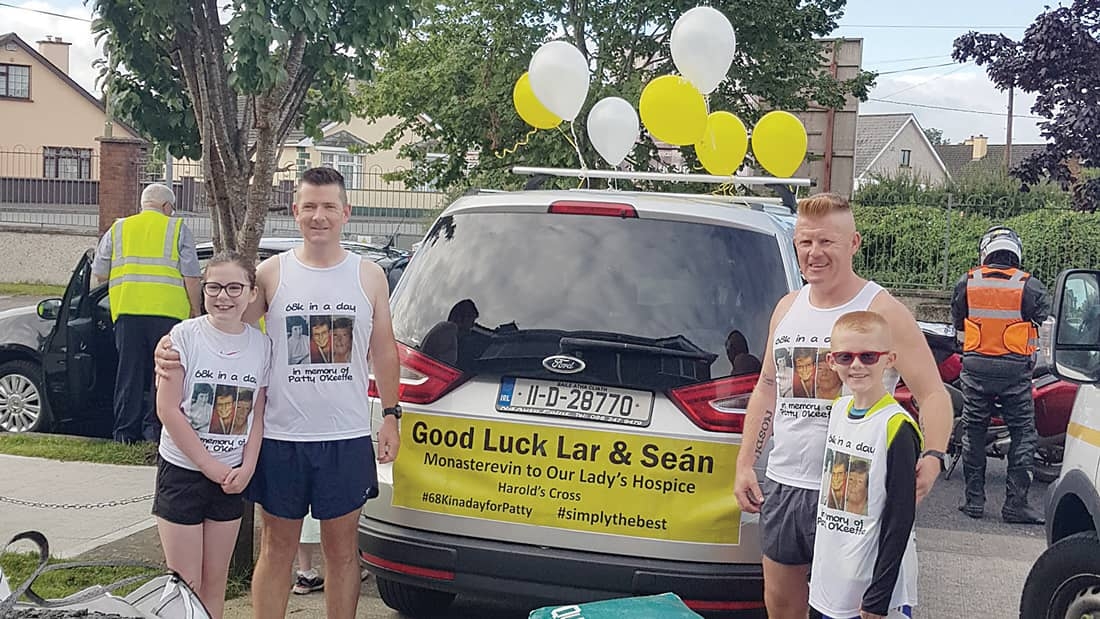 €8,600 raised for Our Lady’s Hospice in Harold’s Cross

THE loss of a beloved mother Patty O’Keefe compelled her son to run 68km in a day for Our Lady’s Hospice in Harold’s Cross.

Lar O’Keefe ran the mammoth 68km journey - from his home in Monasterevin, Kildare to Harold’s Cross with training partner Sean Mahony on August 23.

Sean and Faye Mahony with Lar and Jason O’Keefe

The venture has raised over €8,600 by the GoFundMe deadline of August 31.

Following her passing in February, Lar (42) decided to run to raise money for the hospice.

According to Sharon O’Keefe, Lar’s wife, staff in the Hospice did an amazing job and helped “create special memories” during the final weeks of Patty’s battle with the COPD illness.

“Jason (Lar’s son) and Faye (Sean’s daughter) completed the first 3km with them,” she said.

“We had two fantastic marshals on the day. Kevin Farrell and Ciaran Cunningham who kept the lads safe all the way. Maurice Flood and Dylan O’Keeffe went ahead of us and were ready along the way with water for Lar and Sean.

The family came out to cheer them on when they went past the family home in Crumlin and staff from Our Lady’s fundraising team had a flag finish waiting for them when they arrived.”

Sharon continued: “Along the way we received cash donations, and to date we have raised over €8,000 which is amazing. Lar gave a heartfelt thanks to everyone who helped make the day happen and a special thanks to his running partner Sean who kept him going towards the end.”