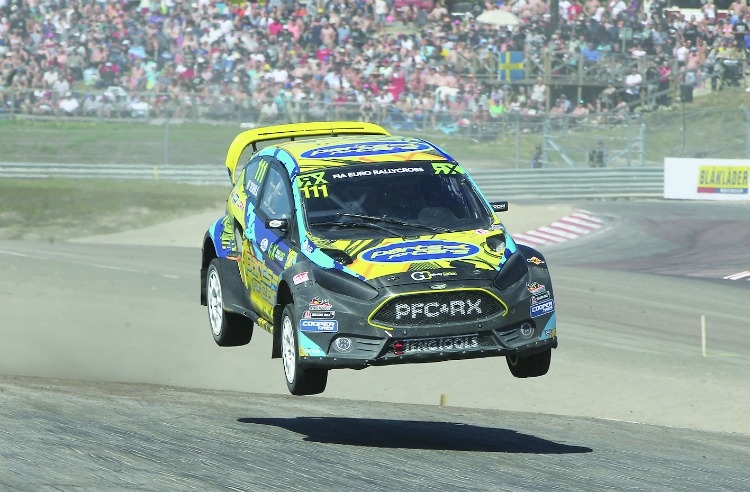 DEREK Tohill and the PFCRX team made the semi-finals of the highlight event of the FIA European Rallycross Championship season at Holjes in Sweden, setting top-three times in front of some 41,000 spectators.

Racing the squad’s 600bhp Ford Fiesta Supercar, the double FIA European Champion from Terenure finished the first day seventh overall, thanks to a pair of consistent times in Q1 and Q2.

Chances of another good result were dealt a blow following contact with compat-riot Ollie O’Dono-van in Q3 that resulted in a spin, but the team struck back in Q4 with the third fastest time against some of the best drivers and teams in the sport to make the cut for the penultimate rounds.

The rain came down just before the semi-finals, in which Tohill started on the third row of the grid.

The challenging conditions made it difficult to move up the order and the Dubliner finished sixth on track and 11th overall in the event, maintaining his run of top-12 finishes in 2017.

With the pace of the Fiesta improving with every event, Tohill and his team will be confident of a strong showing in the coming rounds.

First up will be the British and Irish joint event on July 22/23 at Mondello Park, with the following round of the Championship taking place at Loheac in France on September 2/3.

“Bravery and consistency are really rewarded at Holjes,” said a delighted Tohill.

“Now we’re in the semi-finals consistently – we need to be starting on the middle row to give ourselves the best chance. Being on the back row leaves you too much to do.

“The car didn’t seem to work quite as well in the rain; it was really slippery and I was struggling in the slow corners.

“The team did an amazing job this weekend and the car didn’t let me down once.

“We are really moving forward in almost every area and we’ve a couple of things in the pipeline that we’re looking forward to testing at Mondello Park in a few weeks.

“A lot of locals had tested at Holjes, but Mondello is similar to Loheac so we hope to hit the ground running for the next Euro RX round. I’m really looking forward to the next events” he added.