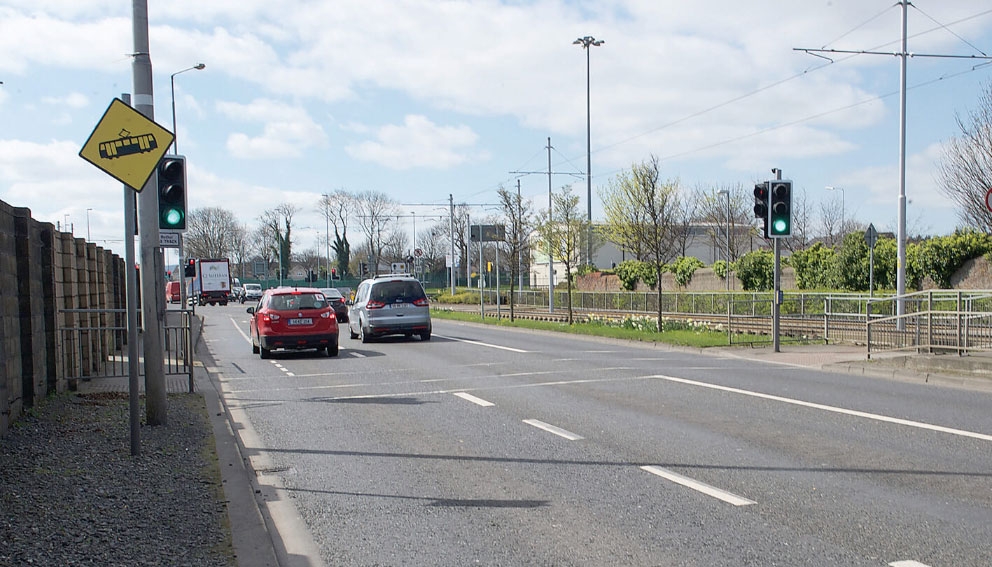 Accident waiting to happen along busy stretch of road

THE LOCATION of traffic lights on a road where schoolchildren from Kingswood Community College regularly cross is an “accident waiting to happen”, according to a local councillor, who is also calling for traffic wardens to be provided at secondary schools.

Independent councillor for Tallaght Central, Mick Duff, raised these issues at a council meeting on Monday.

The traffic lights on Katherine Tynan Road between Kilnamanagh and Kingswood

The issue concerns a busy stretch of road on Bóthar Katharine Tynan, adjacent to the Luas tracks leading to the Kingswood stop of the Red Line, which is a hub of activity in the mornings and afternoons with schoolchildren regularly crossing the road before and after school to access nearby housing estates and bus stops.

Cllr Duff told The Echo: “Parents and the school have been raising the issue that motorists are coming up that road and ignoring the pedestrian crossing, because the lights are off-set just off the road.

“It’s an accident waiting to happen. There have already been a couple of near misses on the roadway.”

In response to Cllr Duff’s query, the local authority stated: “It is intended to replace the existing standard 4m signal poles with 7m signal poles with additional high-level signal heads in order to improve the visibility of the junction.

“Road markings will also be provided to alert motorists to the presence of the crossing.”

Cllr Duff said: “I’m delighted with the council’s response – it’s in response to a lot of complaints from concerned parents.”

Cllr Duff is also calling for the implementation of a school warden further down the same road, to assist schoolchildren from Kingswood Community College who regularly cross that road, and he is hoping for a change in policy, where at present school wardens are only provided for primary schools.

“I have asked the council to put a school warden at that location, as you have to cross a main road, Luas tracks, and a very narrow footpath,” explained Cllr Duff.

“They don’t provide school wardens for second-level students, but a 12-year-old child in primary school is still 12 years old when they start secondary school.

“When it comes to road safety, we shouldn’t automatically assume that teenagers can cross safely.”