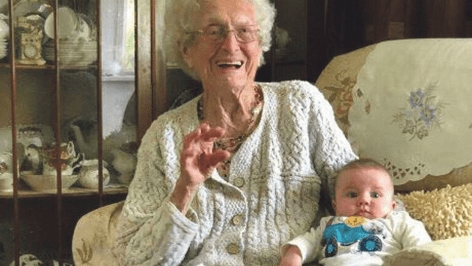 ‘All that mattered to her was family, she loved family’

A CENTENARIAN who brought comfort, hope and positivity to many during these challenging times is being fondly remembered after she passed away peacefully.

Margaret Lynch featured in The Echo in April, when she celebrated her 100th birthday in the garden of her Walkinstown home.

Margaret, who also celebrated her 100th on the Joe Duffy show, featured in RTE’s short film Letters From Lockdown in May – during which she wrote to her five-week-old great grandson Daniel about her life and welcomed him to the family.

Margaret, who was unable to meet her great grandson at the time due to cocooning, finally got to hold Daniel in July, after the first set of restrictions were lifted.

Born on April 3, 1920 Margaret Lynch grew up in the Ranch in Inchicore across from the railway works, with many of her family members railway workers.

She married husband Michael in 1945 and the couple moved to Walkinstown in 1956, and together had six children, three girls and three boys.

Speaking with The Echo back in April, Margaret said that walking, gardening and a good breakfast were staples in her life.

She also volunteered with the Sisters of Charity for over 50 years.

Despite being confined to the house due to cocooning, and unable to visit her hairdresser, Margaret was positive when speaking with The Echo that the current challenges faced will pass.

“I know it is frightening but I do believe that if we all stick together, we will get through this [Covid-19 crisis]”, Margaret said.

“Sticking together and prayer, I still trust in prayer.”

After bringing hope and comfort, and a message that things will be ok to many people, Margaret, passed away peacefully in Our Lady’s Hospice, Harold’s Cross, on November 1.

Speaking with The Echo this week, Margaret’s granddaughter Joanne said: “So many people reached out to us after she passed away.

“The outpouring was unbelievable.

“She brought comfort to people, especially those cocooning.

“She was living on her own at 100 and was just trying to keep herself busy with cooking, gardening and moving around the house.

“A couple of people also wrote to say that she had given them hope, helped them to see that this will pass.

“She lived through 100 years and a lot of hardships, all of which passed.”

She added: “I think my granny also helped people to see what’s important.

“She always said in the later years that money didn’t mean anything to her anymore.

“All that mattered to her was family, she loved her family.”

Margaret is remembered by her children, 19 grandchildren, 29 great grandchildren, neighbours, friends and her pals in the Social Service Centre in Walkinstown.