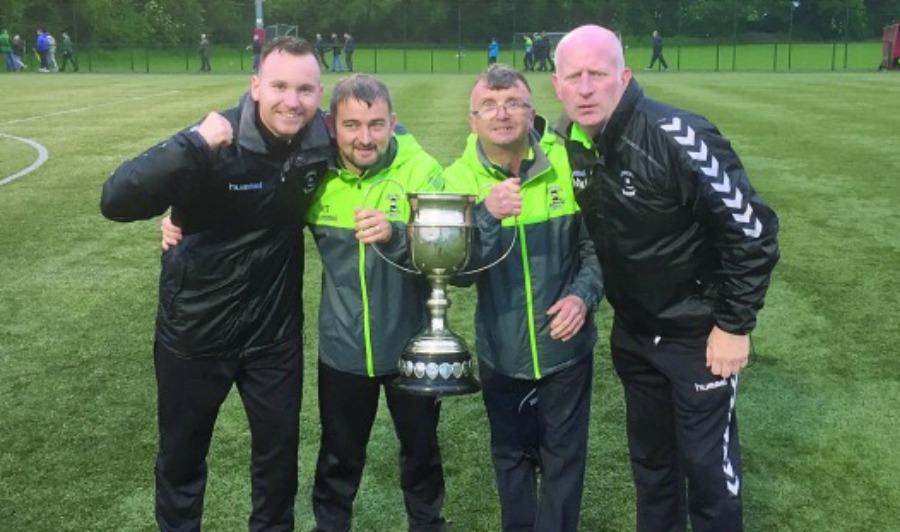 BOOTH Road Celtic completed an amazing season after their Saturday side made it a treble by beating Leixlip United 6-1 in their final match of the season to clinch the LSL Major 1B title on goal difference.

Anything less than victory would have forced the Clondalkin side to settle for a third place finish, but they were having none of that, and raced into a three-goal advantage by the break.

Indeed the game was just three minutes old when Shane Merrigan put them in front after closing down an attempted clearance by the Leixlip netminder.

Philip Sheppard doubled their advantage when he latched on to Mikey Collins’ neat ball and fired home before Collins was rewarded for his part in that score with one of his own that came in the form of a 25-yard volley to the target.

The second half was not even a minute old when James Kelly made it 4-0, powering home a header from Kevin Quinn’s corner.

A Sheppard penalty made it 5-0 before Leixlip managed to pull one back only to see Shane Hennessy dink the ball home for a Booth Road sixth following some tremendous build-up play that involved Kelly, Ryan Rock, Quinn, Collins, Jordan Roe and Dean O’Rourke.

The victory saw them finish level on points at the top with Ringsend Rovers but 20 goals the better of their closest rivals.

And the title win came hot on the heels of the side’s Tom Carroll and Noel Ryan Cup wins which, together with the Booth Road Sunday side’s Albert Walsh Cup success, has made this a remarkable period for a club that had just one league title to its name in the 16 years leading up to this season.