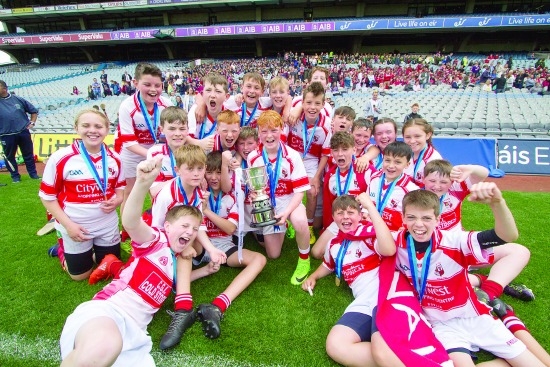 Chrónáin turn the on style

IT WAS mission accomplished for Scoil Chrónáin in Rathcoole on Tuesday as they claimed the Cumann na mBunscol Corn Johnston Mooney and O’Brien crown following a 9-12 to 1-9 victory over Divine Word in Croke Park.

The Rathcoole side put together a solid team performance as they scored nine goals – four in the first and five in the second to stun their opponents.

Scoil Chrónáin had the better of the exchanges in the opening half and established a 4-8 to 0-2 advantage.

Diarmuid O Dulaing, grandson of radio legend Donncha, was in flying form in the opening period and registered two goals and eight points.

O Dulaing hit three frees along with two sideline cuts while Paddy O hEadhra and Liam MacLochlainn also found the back of the net.

Midfielder Darragh O Bradaigh, nephew of Dublin star David O’Callaghan, battled hard to stop Divine Word from getting scores while the substitutes who came in made a big impact.

O Dulaing scored a stunning third goal in the second half to add to his two points while substitutes Liam MacSandair netted two goals and Sean MacEochaidh found the back of the net.

The Rathcoole side last reached a final two years ago which they lost while they also suffered defeat in the semi-final last year.

The school drew in the football decider this year.