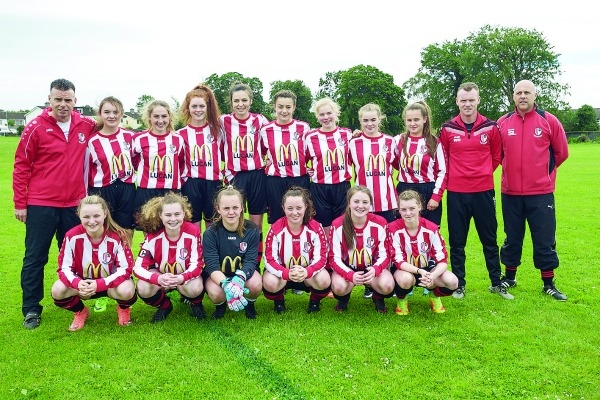 LUCAN United gave it their all, but were unable to deny Shelbourne LFC a clean sweep of Under 16 honours this season after they were edged out 4-3 in the Premier League play-off in Corduff FC on Saturday.

Three times Lucan found themselves in front and three times the All-Ireland and Premier Cup winners fought back on to level terms before Carla Fitzsimons served them up a winner with just six minutes remaining.

It was Ann Marie Byrne who opened the scoring last weekend with a composed finish only to see Jessica Ziu respond in kind for Shels.

A ball in behind the defence provided Aoife Hanley with the opportunity to put United back in front and she refused to pass it up.

But Shelbourne restored parity before the break when Rebecca Cooke cut inside from the left and rattled the net.

A penalty by Zara Lawless midway through the second period edged Lucan back in front for the last time as Shels hit back in similar fashion when Emily Whelan despatched a spotkick awarded after Mia Dodd had been fouled.

And with full-time approaching the treble hopefuls produced the winning goal when Chloe Johnston pulled the ball back for Fitzsimons to rifle home.

While it was a disappointing result, this Lucan side can draw many positives from the past season having also reached the cup final and seen three of their players, namely Nicole Smyth and Kayla and Leah Brady selected for the Ireland Under 16 squad.

What’s more, Smyth, Lawless, Byrne and Jessica Hennessy have also been included in the MGL squad for the Gaynor Cup contest  at the close of June.

Shels, who had to win their closing four games in hand over Lucan to force a title play-off, will still have a number of players eligible to compete again at this age-group next season.