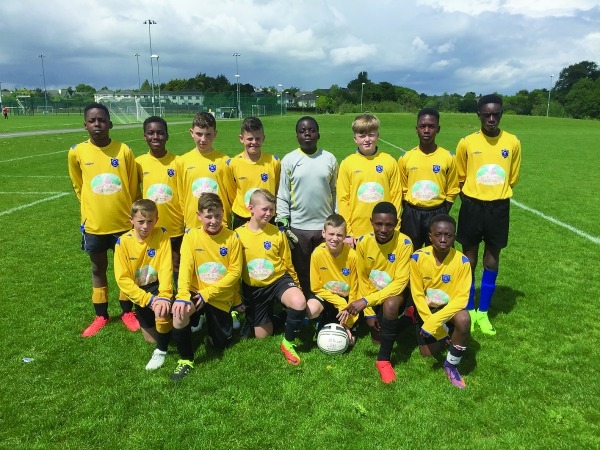 St Thomas’ SNS make their mark in the City

HAVING won the Tallaght League in 2015/2016, St Thomas’ SNS managed to really make their presence felt in the City 1A League.

Indeed the Tallaght side made it through the group undefeated, having won three matches before drawing their final game of this phase.

Captained by goalkeeper Ola Alarare, who demonstrated great drive and leadership in pulling off some incredible saves throughout, the team progressed to the quarter finals where they were drawn at home against Holy Family, Swords.

In what was a close game they managed to dig deep and grind out a 2-1 victory, Aji Habeed producing some fine skills down the wing to help his team progress into the Dublin semi-finals where they came up against Johnstown Boys in Dun Laoghaire.

That, however, was where their journey ended yet they can still look back on a very successful year having won the STARS football tournament in Trinity College Dublin back in April.

“It was a real privilege to work with such a great bunch of lads who never gave up and kept trying” said Simon Brennan, who, together with Denis Daly, managed the side.

“They won the league undefeated but more importantly playing the right way- passing, moving, showing for each other and having the confidence to get on the ball and play”

“We would like to take the chance to wish all the boys the very best and we hope they continue to train hard and develop their footballing skills and apply the same work ethic that they showed on the field, to their studies in secondary school” he added.