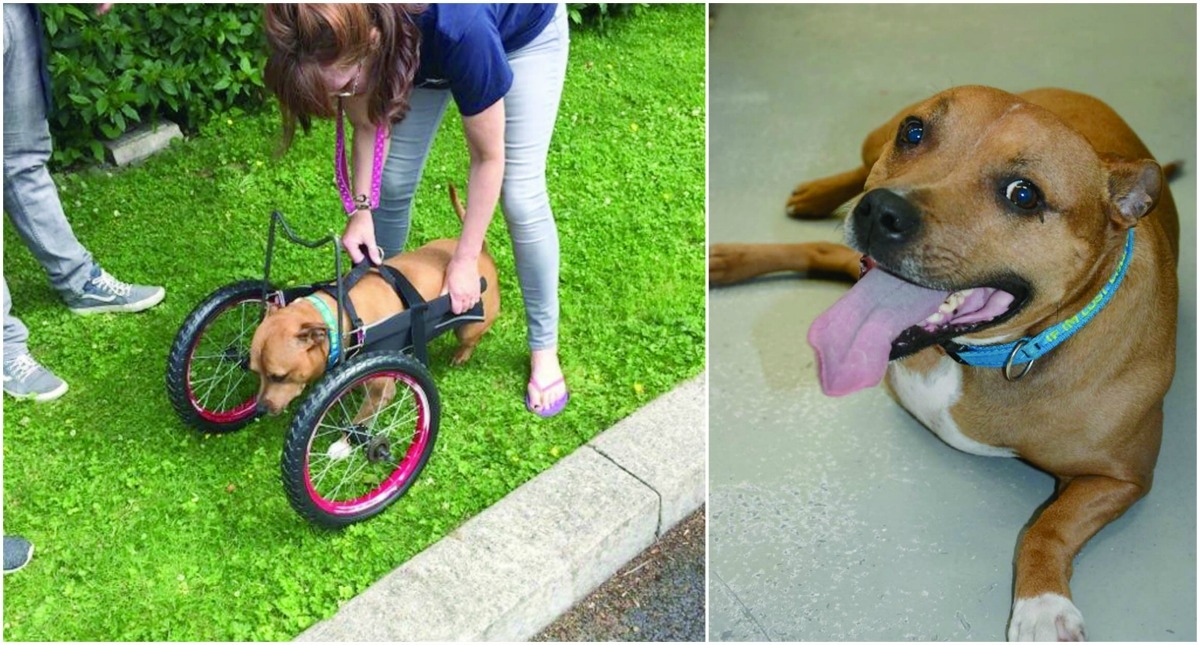 LOCAL amputee dog Remy this week received his very own customised wheels thanks to the 3D Assist team at IT Tallaght, which to date has been making 3D prosthetic arms for children.

The innovative 3D Assist team, which is made up of volunteer graduates, lecturers and students, prints 3D prosthetic arms for children – who are given the new, customised limb for free.

The team is now examining the possibility of assisting child amputees in conflict countries and also working with local schools on making braille displays for children who are blind or visually impaired.

This week, the team had a new client called Remy, an eight-year-old Staffie cross from Firhouse who had his front right leg amputated when he was found abandoned and injured as a pup.

Remy’s owner Collette Tallon told The Echo: “I’ve had Remy since he was about six months old and despite everything he went through in his early life, he is so lovable and friendly to both other dogs and people.

“I’ve never felt so loved as I do with him and I’d love to try and get him mobile.”

She added: “I have a pram for Remy that I bring him for walks in but as he’s getting older I’d really like to help him get moving, give him a new lease of life.

“I heard about the guys here at 3D Assist and asked them if there was anything they could do and they designed a little harness on wheels, it’s like a walking frame, for Remy that will allow him to exercise.

“The team at 3D Assist are amazing and were so willing to help.

“We’ve done a few practice trials with Remy and he’s starting to get used to his new mode of transport.”

Elaine McGough, who working in the Materials Laboratory in IT Tallaght is part of the 3D Assist team, told The Echo that Remy is their first dog client, but that they are happy to work with animals.

“Remy is the first dog that we have helped and the team designed a wheelchair apparatus that allows him to use his back legs for exercise.

“We’d encourage anybody to get in touch with any suggestions they may have and we’ll do what we can to help out.”

All of the devices made by 3D Assists are provided to people, and dogs, for free.

Anybody who is in a position to fundraise for the project or any local businesses that can donate materials or equipment are invited to visit the 3D-Assist Facebook page.