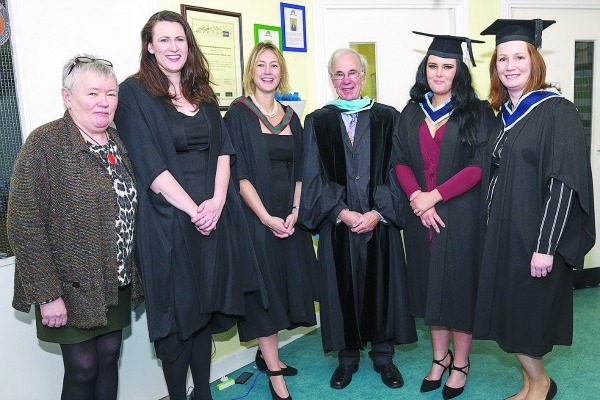 An Cosán and its graduates celebrate their achievements

ONE WEEK after being presented with the Community Award at this year’s Tallaght Person of the Year, An Cosán continued with its celebrations and conferred 42  graduates with their degrees who took part in a collaborative educational partnership between the Jobstown education centre and IT Carlow.

From its base in Jobstown, An Cosán has transformed the lives of thousands of people through education, creating and providing second-chances for early school leavers, parents who want to return to education, locals with literacy difficulties, or anybody experiencing barriers to education.

The 42 graduates conferred with degrees earned them through a collaborative partnership between An Cosán and the Institute of Technology Carlow.

Speaking at the ceremony, Dr Patricia Mulcahy, President of IT Carlow, commented on the huge contribution that An Cosán continues to make in empowering communities through education.

She said: “An Cosán is to be congratulated on the important role it plays in providing access to quality higher education opportunities for many people who would otherwise be denied such an opportunity. In doing so, it transforms lives through education.

“I congratulate each and every graduate here today on their success and achievement.”

During the conferring ceremony, three awards were presented for outstanding academic achievement with Laura Jordan from Tallaght, who graduated with a Bachelor of Arts (Honours) in Early Childhood Education and Care, receiving An Cosán Student of the Year Award at Level 8.

Dubliner Laurence Moloney, who received a Bachelor of Arts in Applied Addiction Studies and Community Development, was presented with the Accenture Student of the Year Award at Level 7 and Deirdre Keating, holder of a Certificate in Transformative Community Education, received the ESB Student of the Year Award at Certificate Level – after she enrolled with An Cosán and studied online through its virtual community college.

A centre of learning, leadership and social enterprise, An Cosán supports more than 600 students annually in accessing part-time education programmes, from basic literacy to honours degrees and special purpose awards.

Since 2007, according to the community learning centre, a collaborative partnership with IT Carlow and An Cosán has resulted in the delivery of high-quality education to students, underpinned by a shared ethos in supporting equitable educational access at third level.

A further 20 students were also presented with Certificates in Transformative Community Education at Saturday’s celebration.