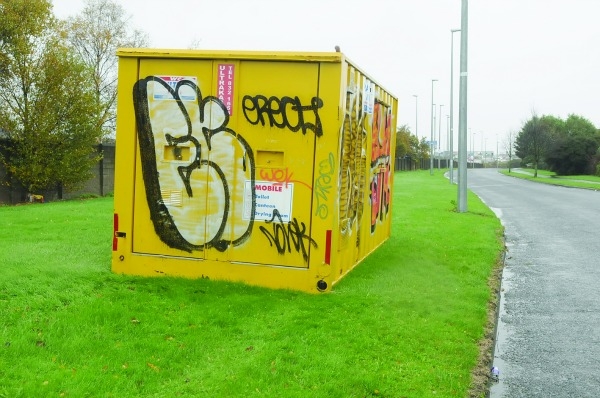 Residents not too mellow about yellow graffiti-covered canteen

A yellow container daubed in graffiti left on Treepark Road in Kilnamanagh has been baffling residents within the Tamarisk area of the estate after it appeared last week, reports Laura Lyne.

The container arrived into the estate last Tuesday, according to residents, and was already covered in graffiti before it was placed on the green space.

A council spokesperson said that the container is a mobile canteen for the council’s Tree Crew working on the trees in the area.

According to signs that are located on the container, it contains a toilet, canteen and drying room.

Concerned residents in Kilnamanagh contacted The Echo about the container, which arrived onto the estate without notice.

They told The Echo that they spotted South Dublin County Council workers using the facility on Tuesday at lunch time.