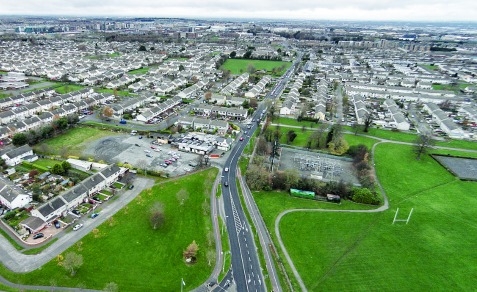 Residents bogged down over new pavilion

The meeting, which was described as “informative”, took place in the County Library last Wednesday, November 25 as part of the Part 8 consultation process.

Residents in the area have opposed the new location of the proposed pavilion, which is set to be located adjacent to the Tallaght-Ballyboden Cycle Track and tennis courts currently within the park.

Original plans for the pavilion and car park were agreed in 2008 and would have seen it located beside the electrical station where the car park for the pavilion is proposed – these plans were cancelled due to a lack of funding.

During a meeting of residents earlier this month, they raised concerns about the proposed pavilions, noting that they were being installed for local clubs, despite the clubs not using the pitches due to issues with waterlogging.

Jim Lawlor, chairperson of Old Bawn Residents Association told The Echo: “It was quite a good meeting, everybody managed to have their say.

“There were a good few residents there and a couple of local councillors, including Charlie O’Connor, with representatives from Thomas Davis also in attendance.

“One of the main issues that cropped up was to do with the condition of the pitches located in Dodder Valley Park, which become waterlogged for a large part of the year.

“In regards to the site of the pavilion, everything that was discussed was collected by Michael Hannon [Senior Executive Parks Superintendent], who chaired the meeting.

“By and large, we managed to get our point across. It was an informative meeting for residents.”

The sports pavilion at Dodder Valley Park is currently open to Part 8 public consultation, with submissions and observations on the plans accepted until December 18 at 4.30pm in writing to South Dublin County Council or via email to info@sdublincoco.ie.

As part of the plans, six changing rooms, storage facilities and accessible facilities for local clubs will be developed along with a 40-space car park.