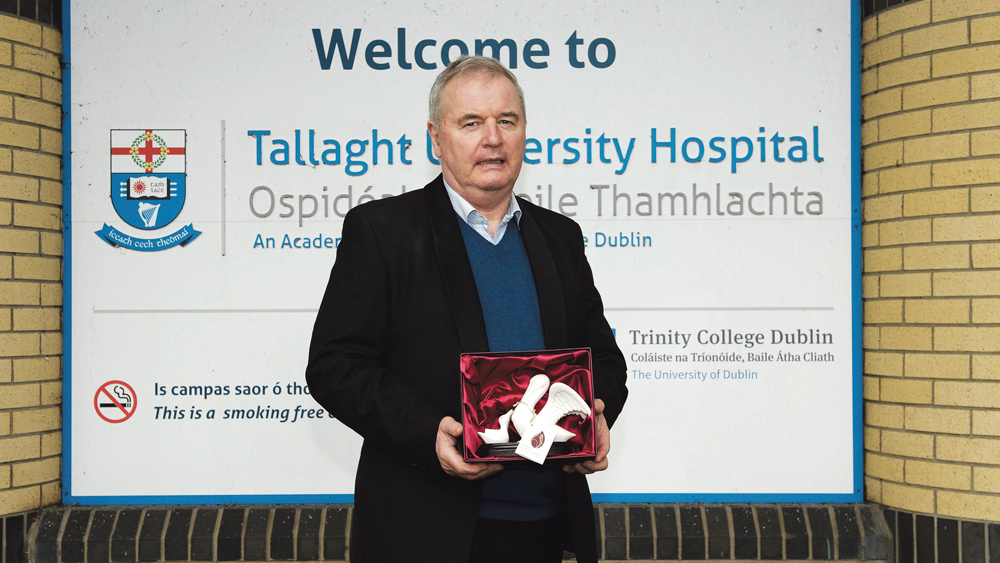 A PROLIFIC blood donor was commended by the Irish Blood Transfusion Service this week, for his “generosity and support” over a near 40 year period.

“The platelets, in particular, go to cancer treatment patients with the same blood type,” said Anthony, an Estates Fire Officer at Tallaght Hospital.

“I was 17 when I gave my first donation. My mother would lose a lot of blood. I went into a clinic in Ballyfermot to give a pint of blood. They said my blood type is A- and were very interested.

“Then I would get phone calls and could go in at least once a month. You had to have at least four weeks between each donation and if you were unwell, sick, you could not donate.

“The platelets would take an hour. My first one in St John’s Ward in Crumlin Children’s Hospital, they said it was going straight to a kid on the ward. When I was in the army, they were very good in allowing me half a day whenever I got a call to make a donation. One time, I broke my arm and missed out for months.”

Mr O’Brien would have continued to make donations, but was deferred on medical grounds in 2013 after a diagnosis with osteopenia.

An appeal by the IBTS for donors last month, led him to get back in touch with them, but again, he was stood down due to a triple bypass he underwent last June.

“I saw a call in December 2021 for A- donors. I rang them and when I said I had a triple bypass, they said I could not donate. The girl on the phone expressed surprise at the amount of donations I had made,” said Anthony.

A letter sent to Mr O’Brien on January 6, from Stephen Cousins, National Donor Services Manager, at the IBTS, thanked him for his service.

“We don’t have many donors with a record such as yours and so I wanted to write to you personally to thank you most sincerely for your generosity and support over the years,” said Mr Cousins.

“Your donations will have impacted hundreds of lives in Ireland over the 39 years you were a blood and platelet donor.”

A spokesperson for the IBTS told The Echo it is not possible to identify the person in Ireland with the most blood donations, as people can be blood donors and platelet donors at different times.

Platelet donors give platelets once a month and blood donors can only give every three months, representing “a significant differential between their totals”.

“However, 170 donations is a significant number and represents a lifetime of giving,” said the IBTS.

Anthony received a porcelain pelican award when he hit the 100 mark during a special ceremony at the Shelbourne Hotel.

“I was amazed that they sent a letter which said in it ‘impacted hundreds of lives in Ireland’, that is a massive compliment and priceless,” said Anthony.

The IBTS are always looking for blood donations. Due to Covid, people have to make an appointment prior to attending a local clinic – call 1800 731137.

Further information on registration, eligibility, and preparation can be found on giveblood.ie.

The next clinics in The Echo area are in February – Finnstown Castle House, Lucan, (Feb 14-17) and the Green Isle Hotel, Clondalkin (Feb 21).