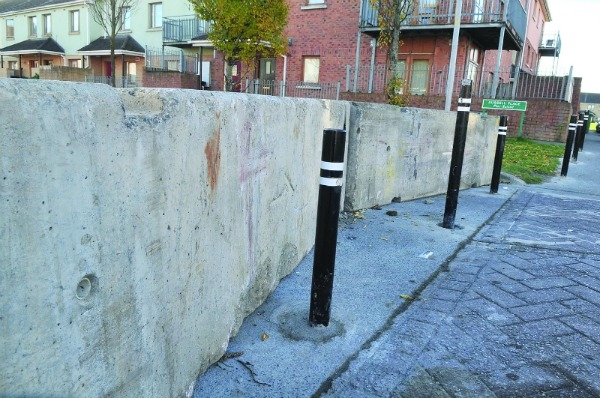 Anti-speeding bollards in Tallaght estate knocked down by cars

UPGRADES will be made to traffic-calming measures in Russell Place, after anti-speeding bollards were knocked down by cars travelling too fast – and not reading road signs.

Residents contacted The Echo this week after three anti-speeding bollards in their community were knocked down, with one bollard removed completely.

Speaking to The Echo, one resident said: “The cars are constantly speeding and it’s very dangerous as a lot of small children, including my own, play out in the afternoon.”

Residents contacted South Dublin County Council on a number of occasions to get anti-speeding bollards re-instated – with the council placing two large road blocks at the location in recent days.

However, residents were not satisfied with the council’s efforts, and told The Echo: “They look hideous, these road blocks are used for the centre of motorways.

“This is a nicely kept area and I can’t believe that this type of road block has been put in a nice estate.”

However, after being contacted by The Echo, the council’s road department moved to reassure residents that the cement road blocks are only temporary.

A council spokesperson said that the road blocks will be replaced with new bollards on a raised plinth.

The plinth is a new addition and will stretch across the road, with new bollards fitted on top.

The council said: “Hopefully, people will see the raised plinth and stop before they mount the plinth and knock the bollards again”.

The council confirmed that damage was most likely caused by motorists driving too fast and not reading road signs or road conditions.