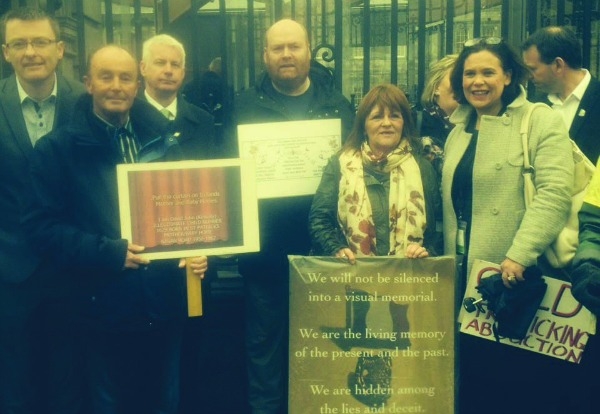 MOTHER and Baby Home survivors from South Dublin County were among those who engaged in a peaceful protest outside Dáil Éireann on Wednesday (April 6).

Clondalkin resident David Kinsella and Parkwest resident Terri Harrison are organisers of the ‘We Are Not Gone Away’ campaign.

David (57) said: “Our core purpose is to remind new incoming government parties that we haven’t gone away. We are ageing survivors of Ireland’s history in mother and baby homes and Magdalene children.

He continued: “In Ireland’s 2016 centenary, we are seeking a full apology and fast-track interim redress to be put in place, while the commission of inquiry continues its work.

“Since February 2015, a lot of survivors have died and some are ill or well aged. A recent report similar to our plight has been published in Belfast and the UK titled What Survivors Want.”

Terri Harrison (60), was marched home from the UK by the Catholic Church. As a single 18-year-old pregnant woman, she was forced to go to St Patrick’s Mother and Baby Home.

There, she was denied pain relief in labour and medical care, before nuns took away her son Niall after a matter of weeks.

What Survivors Want is published by Prof. Patricia Lundy from Ulster Univer-sity and is recommended for survivors.