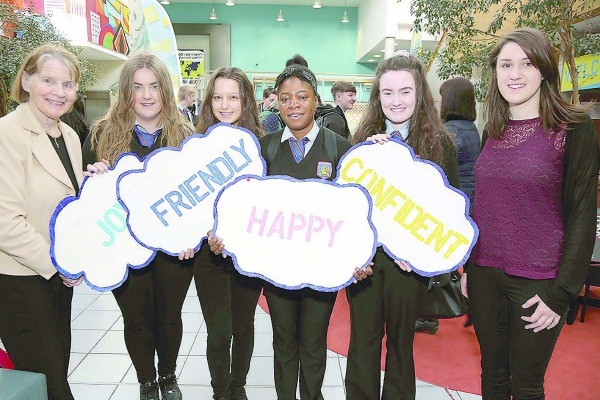 The schools, from the areas of Tallaght, Clondalkin, Lucan and Drimnagh, came together to present their creative ideas and to see what other local schools are doing to tackle social issues.

St Joseph’s College in Lucan had the highest number of teams taking part in the day, with seven different projects ranging from Alzheimer’s Awareness, Concussion in GAA and Classroom Comfort YSI – Lucan Community College also had a team presenting their project entitled #IAMME.

Clondalkin schools taking part in the event included Coláiste Bríde and Moyle Park College which both had two teams presenting their projects, and Collinstown Park Community College which presented its project called I Hate This Hotel.

Our Lady of Mercy Secondary School in Drimnagh had one team taking part, with a project entitled Be Smarter Than Your Smartphone.

During the event, each team was given two minutes on stage to present their social innovation to the audience which was made up of students from the other schools, invited guests and the Young Social Innovators panel.

Rachel Collier, CEO of Young Social Innovators said: “We want young people to become innovators in their own lives and be resourceful in creating positive change and solutions in the world around them.

“The energy felt at these events must be experienced and we wish all the participants the best of luck in progressing their projects and continuing to advocate for change in their communities.”

This is the 15th year of the Young Social Innovators of the Year Awards, with more than 6,500 teenagers across the country taking part in the event with 450 projects from 211 schools looking at a very diverse range of issues including integration, equality, crime, health, safety, homelessness, intergenerational initiatives and more.