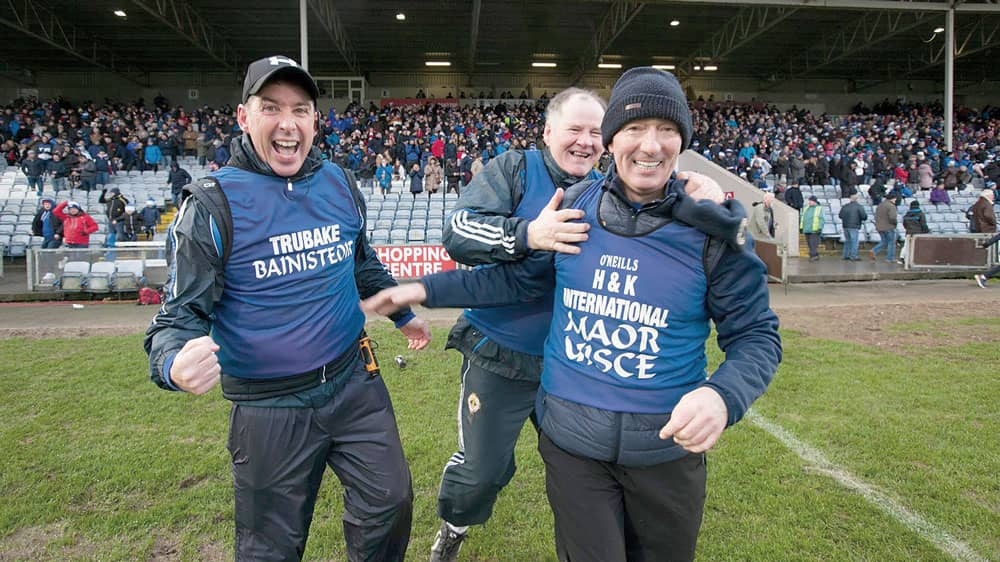 BALLYBODEN St Enda’s manager Anthony Rainbow has emphasised the desire teams have to get back on the grass as they gear up for the return of the Adult Football League this weekend.

It is half way through the year and now, finally, the opening exchanges are set to be played after teams carried out months of isolated individual training programmes.

“It’s been seven months really since we’ve been on the pitch,” Rainbow told The Echo.

“The players have been working away on their own, we gave them all individual programmes, so they have been doing them over the past few weeks and months.

“But look, the players are absolutely delighted to be back, this is why they all train so hard. All they want to do is play football matches.

“The coaching staff are ready and looking forward to the season ahead, and the members of the club are excited to be back involved with the team again.”

“We were beaten by three points, but look, that is better than any training session,” former Kildare footballer, Rainbow, insisted.

“It’s a good exercise for the lads and an opportunity to see where things are.”

It was a repeat of the Senior ‘A’ Championship showpiece, which saw Kickhams beat Boden by 14-points last September.

Now, Boden’s first taste of competitive action of 2021 will see them travel to 12th Lock to take on Lucan in the curtain raiser in Division One South.

“Ever since I’ve been involved it’s been a tough game and it’s over in Lucan as well, which is a tough place to go to.”

Elsewhere, Thomas Davis stalwart Ciaran Farrelly will get his first taste of competitive action in the driving seat when the club host Ballinteer St Johns on Saturday.

Farrelly took over as manager of the team from Paul Kelly, having played with the seniors for 20 years and developed his coaching skills with the Dublin Minor and Under 20 teams in recent years.

The Kiltipper club have the strongest panel they have had in years with the Kirby brothers, Dublin player Cian Murphy, Ryan Deegan in midfield and Eoin Lambert among others helping guide the club back to the top.

Although they could be without Davy Keogh, who is on duty with the Dublin hurlers, Davis’ will be hoping to maximise their chances against a Ballinteer side that has struggled in recent years.

Meanwhile, St Jude’s will go up against powerhouses of Dublin football, Kilmacud Crokes, in Tymon North Park on Saturday.

Both teams were beaten semi-finalists in the championship last year and the stage is set for a rip-roaring showdown at 6.30pm.