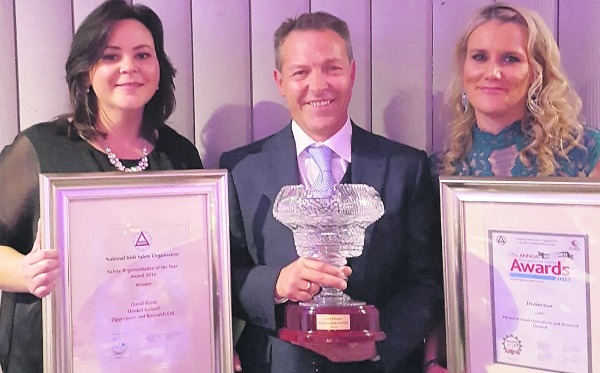 TALLAGHT-based company Henkel Ireland, has been awarded a distinction for driving improvements in safety performance, at the annual Occupational Safety Awards on October 7.

David Byrne, a Ballyfermot-based employee with Henkel, received the highest individual accolade as Ireland’s Safety Representative of the Year.

Henkel, a global leader in brands and technologies, employs 1,000 employees across the UK and Ireland, and have a technology centre of excellence at Tallaght Business Park and a manufacturing plant in Ballyfermot.

David Byrne, who is part of the facilities and engineering team at the Tallaght plant, has been a safety representative with Henkel for six years.

After recruiting 75 volunteers to become SUSA Observers (Safe and Unsafe Acts), he trained them to recognise, prevent and deal with safe and unsafe acts.

In 2016, he became Chair of the CBS Steering Committee and was involved in the development of start-up SHEFTS (safety health and environment focus talks).

Liam Murphy, Henkel’s UK / Ireland President, said: “David has gone above and beyond in his dedication to driving continual improvement in health and safety. To win not one, but two awards, is real testament to the hard work the entire Ireland team has put in.

“I spend a considerable amount of time travelling to Henkel sites around the world, so it’s a matter of personal pride to see the ‘home team’ get recognised for the outstanding Health and Safety record they have achieved.”