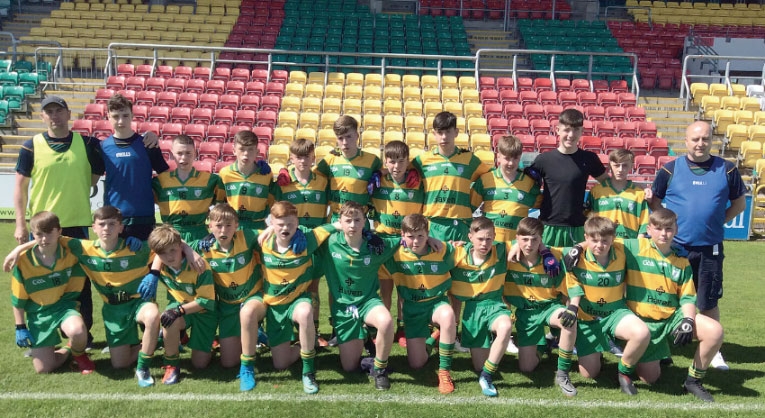 BALLYFERMOT De La Salle Under 14 footballers came out on top in the Division Seven Féile Final against Robert Emmets in Tallaght recently.

A strong second half display saw De La Salle run out 3-7 to 2-3 winners.

Ballyfermot fended off a strong Emmets challenge to raise the title

It was a great occassion for both clubs with Robert Emmets reaching their first Féile final while Ballyfermot were pipped at the post last year.

The first half saw the Ballyfermot side show all of their experience with Aaron Corish, Kyle Murphy, Jack O'Reilly and Craig Delaney in fine form.

The Greentrees outfit grew in confidence with Josh Byrne, Daragh Butler and Glen Larkin and Sean Carey leading the way.

The teams were all square at the interval, but a great start from Ballyfermot after the break laid the foundation for their victory.

Aaron Corish, Kyle Murphy and Jack O’Reilly were among the scorers as Ballyfermot broke through for good goals.

To their credit, Emmets bounced back again with Jude Healy finding the back of the net while Jack O’Connor popped one over.

But with goalkeeper Jake Kelly, along with Corish, Murphy and O’Reilly, performing extremley well, Ballyfermot went on to win their first Féile title since 2012.