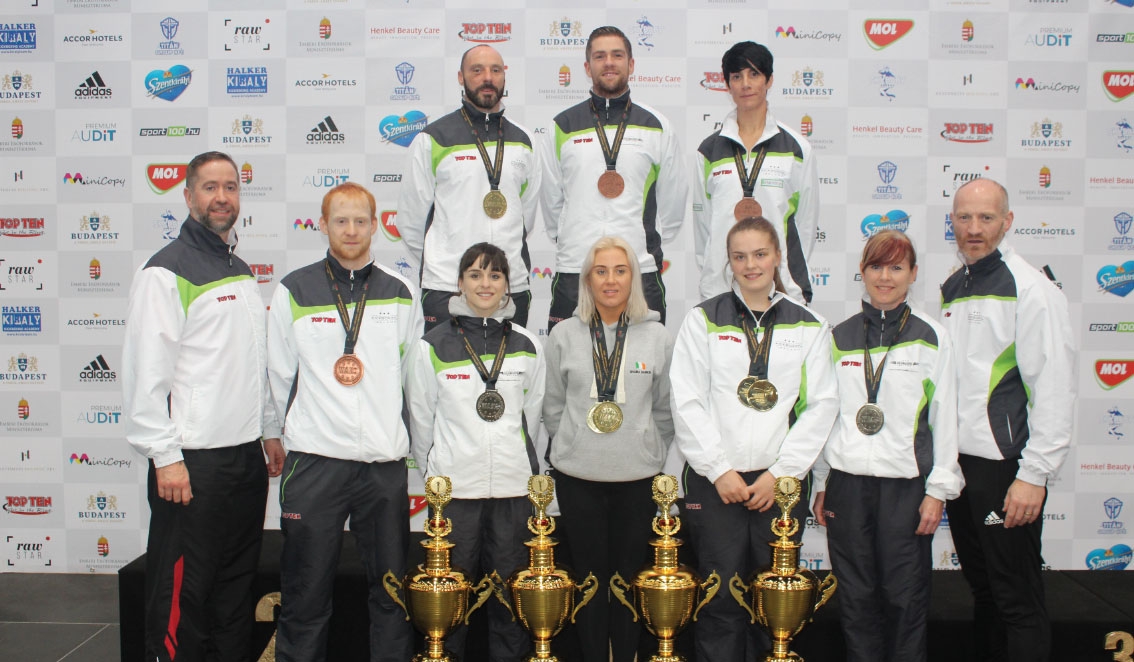 TALLAGHT Martial Arts enjoyed a tremendous outing at the Senior WAKO World Championships in Budapest where seven members represented both the club and Ireland with Shauna Bannon the star of the show.

The event, in which more than 1500 competitors represent more than 60 countries, saw the TMA fighters help Ireland to a tally of 22 medals (six gold, five silver and 11 bronze) and, with it, sixth place in the medal table.

The TMA fighters were on top form winning three World titles and two bronze medals, with Bannon leading the charge.

Lining out in the -55kg Points Fighting and Light Contact divisions, she ignite her campaign in the latter  with a split decision win against Nelly Hanicz  of the host country.

This saw her through to the quarter finals where she took on Guillermina Barat from Argentina and won by maximum score in the second round.

Olga Grigoreva was her opponent in the semi finals and this proved another closely-fought contest over the first two rounds, before the Tallaght woman out-kicked and punched her Russian rival to win 3-0.

Standing in her way of the title was Sonja Stacher from Austria, but Bannon took control from the onset of this clash with brilliant movement and counter punching to card another unanimous win and, with it, her first WAKO World title at the tournament.

The Tallaght MA star also took her place in the -55kg Points Fighting division, and started with a maximum 10-0 win over Guillermina Barat from Argentina.

In the quarter finals she faced Tirill Naess Bjornestad from Norway, a very experienced competitor, in a battle that was neck and neck over the opening two rounds.

In the third round, she caught her Scandinavian opponent with two head kicks to enlarge the deficit after which she held onto to progress to the semi finals.

Back up against Stacher in the last four, Bannon took control off the bout and won by maximum score of 12 – 2 points to set up another showdown with Nelly Hanicz from Hungary in the final.

This was an enthralling contest from start to the finish with both fighters serving up an excellent display of points fighting that eventually resulted in the Dubliner clinching an 18-17 victory and a second World title.

This tremendous double resulted in Bannon also scooping the ‘Best Female Fighter of the Tournament’ Award.

Meanwhile Bannon’s sister Nicole was competing in her first Senior WAKO World Championship in which she lined out the -70kg Points Fighting section.

She opened with a clash against Vedrana Halincic, the current European champion from Croatia, against whom she fought back from three points down at the start of the third to draw level and force extra time, during which period she pipped her well-decorated opponent by one point to make the quarter finals.

There she faced 2015 World champion Henrietta Nagy from Hungry in a nailbiting contest that she won 16-15.

In the semi final she took on the very experience Italian Domenica Angelino in another very close fight, but this time around she lost by four points after sustaining two late head kicks.

Shauna and Nicole’s father Martin took his place in the Master -94kg Points Fighting section in which he was pitched against Zvonimir Gribl in the semi final.

The Croatian fighter took the lead from the onset and held onto it over the two rounds to progress on the final which he won, while Bannon had to settled for bronze.

Dave Heffernan, the current World and European Champion in the  Master +94kg Points Fighting division, beat Damon Kennard from the US 11-5 to secure his place in the decider against Peter Csikos from Hungry.

The Tallaght MA competitor got off to a great started with some outstanding hand scores to the body to open up a three-point lead by the end of the first round.

He increased that advantage in the second with some exceptional head kicks as he retained his WAKO World title.

Heffernan also received the ‘Coach of the World Champion-ship’ Award, in recognition of all his hard work with the Irish National Kickboxing team over the last number of years.

Keri Browne, fighting in the -65kg points fighting section, found herself up against the current World Champion against whom she put in a solid display in the first round.

But the Hungarian upped the pace over the next two and took the win despite a gritty battle by Browne.

Gar Ryan, fighting in the -79kg Points Fighting field, got off to a flying start against Lucio Rodriguez from Argentina, winning by a maximum score of 14-4 to set up a clash with current World champion Emanuil Dimitrov from Bulgaria in the last eight.

This proved a fast pace contest from the start with both fighters trading points over the three rounds before the Bulgarian registered two head kicks to make it through to the penultimate rounds.

Stephen Jones, fighting in the -94kg Points Fighting section, put up a great show against Jeno Rohonczi from Hungry, but eventually lost out on a berth in the last four.