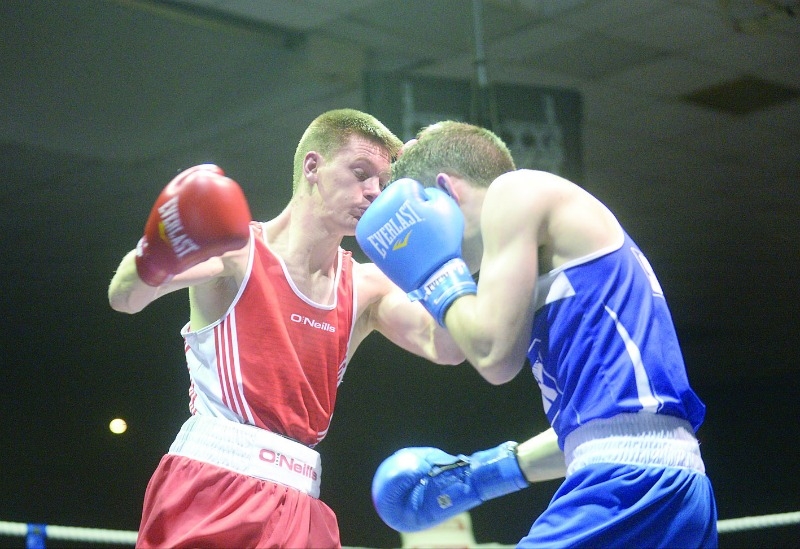 Bates is back on the brink of National glory

ST MARY’S Boxing Club’s George Bates will be hoping he can make it third time lucky in his bid for the National Elite 60kg Championship title.

A convincing 5-0 victory over Gary McKenna of Old School BC in the National Stadium on Friday propelled the Tallaght man into his third decider at this level where he will face off against Patrick Mongan of Olympic Boxing Club tomorrow (Friday).

Having been twice stopped one step short of this prize by Holy Trinity’s Sean McComb, who has moved up to 64kg, Bates is hoping that his thirst for Elite Championship glory will be finally satisfied.

Bates and McKenna are no strangers, but it was the former who profited more from this familiarity as St Mary’s Head Coach Noel Burke explained.

“He [Bates] has boxed Gary before and has done a bit of sparring with him, so he knows him well.

“He [McKenna] is a game aggressive boxer who keeps coming forward. You don’t have to go looking for him.

“But George is a very efficient counter puncher and we decided to let him come on to his punches and it worked.

“He’s in the best form I’ve ever seen him. He seems to be improving all the time which is unusual for boxers when they get to that age. They don’t seem to improve that much.

“But he’s very determined and there’s nobody who deserves it [a National Elite title] more than George” he insisted.

Burke certainly believes his 23-year-old protégé is well capable of taking the final step on the road to National Elite Championship glory saying “He [Mongan] is an strong aggressive southpaw, but George has done well against this type of fighter.

“He’ll have a significant height advantage over Mongan which can present its own problems, but George has always coped well with anyone he has a reach on” he pointed out.

Bates’ progression to the final was the highlight of the weekend for Mary’s who saw Adam Courtney, Patrick Linehan and Michael Frayne all beaten in their respective semi finals.

In what was a very close contest, Courtney was edged out 3-2 in his bout with 52kg opponent Thomas McCarthy of Mayfield.

That fight marked his first time back in the ring since badly injuring his shoulder in last year’s Elite Championships and he can draw many positives from his performance.

Linehan meanwhile came up against Bates’ nemesis of the last two years, Sean McComb in the 64kg semis.

“It took Paddy too long to figure out McComb who was very cagey in this fight” recalled Burke.

“He did finish strongly, but, by then, McComb had won the first two rounds. Still it was a very good learning experience for him” he stressed.

Frayne had a tall order on his hands in trying to despatch National Light Heavyweight champion and Olympian Joe Ward, but Burke was most pleased with his attempt.

“Michael boxed really well” he said. “He came out strong and won the first round. I think he surprised Ward.

“But he received a cut over his eye in the last round and that proved a real problem for him, but he kept on going and showed great heart. I was really pleased with how he performed” he added.