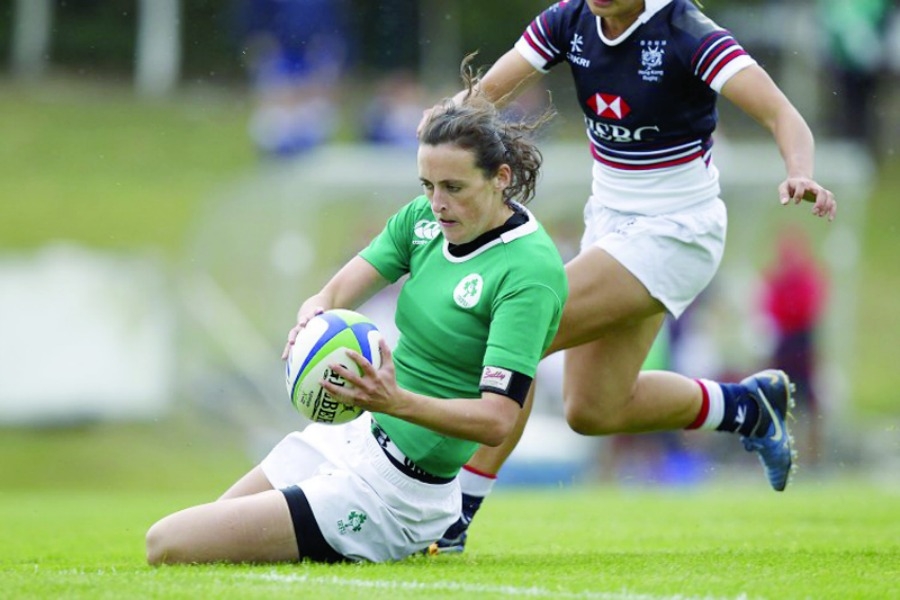 CLONDALKIN’S Hannah Tyrrell produced a tremendous late individual try that clinched a bonus point for Ireland in their 3-27 Women’s Six Nations victory over Italy and propelled them back to the top of the table in L’Aquila on Sunday.

The Ireland sevens international player managed to gather in a crossfield kick by Nora Stapleton before fending off several challenges in a blistering 50m run to the line for what was her very first try with the Ireland 15s.

“It was a great bit of clever play by Nora Stapleton to see that the Italians were all bunched up over on the left and to kick across” recalled Tyrrell.

“The ball hadn’t come out to my wing much earlier in the game so this was the one chance I had to really stretch my legs” she told The Echo.

Just as they had been against Scotland the previous week, Ireland looked to be in for a real dog fight in the Stadio Tommaso Fattori as the two sides managed to put up only three points apiece by the break, Stapleton shooting over before Michaela Sillari responded for the Azzurri.

Ireland registered their first try after the recess when hooker Leah Lyons managed to ground the ball at the posts and Stapleton tagged on the extras.

Sophie Spence and skipper Paula Fitzpatrick from Tallaght also made it over the whitewash to put some daylight between the two sides.

It looked as if Tom Tierney’s side would have to be content with the win, but Tyrrell had other ideas and once she scooped up the loose ball from Stapleton’s kick, she hit the afterburners to secure the bonus point that saw them leapfrog England in the table.

“We knew it would be tough against Italy” said Tyrrell. “They had really put it up to Wales the week before and they really came at us. They attacked the ruck and produced a lot of line speed.

“Handling errors and silly decisions didn’t help us. The chances were there but we couldn’t capitalise on it.

“It was a very even first half, but we regrouped when we got it to halftime and gave ourselves a better attacking platform to break free in the second half” she recalled.

Tyrrell returned to the Ireland 15s squad after playing her part in a top-eight finish for the Ireland 7s in their HSBC World Series in Sydney earlier in the month.

Indeed two pool wins against Fiji and Brazil propelled them into Sydney 7s quarter finals were they came undone against the USA.

Tyrrell was quick to underscore Ireland’s upward trajectory in both sevens and 15s rugby saying “There are a lot of good players coming through from other sports who are really beginning to understand rugby.

“We’re moving up the table. Sydney was the first time that we had a top-eight finish and we’ll be looking to improve on that in Las Vegas.

“The 15s have two wins from two in the Six Nations under their belt, so women’s rugby in Ireland is in a really good place at the moment” said the Dubliner who is hoping to be available for the France Six Nations game later this month.