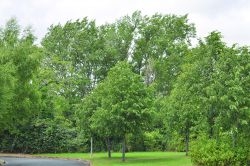 Battle of trees won by locals, with preservation order vote

RESIDENTS have won the “first of many battles” over a proposed residential development at Coolamber after a Tree Preservation Order was granted by South Dublin County Council.

Local man John Coleman told The Echo that the community was delighted to see the order carried after a vote on July 13.
John said: “Councillor William Lavelle came up with the concept of a Tree Preservation Order and we had been driving that for five or six months.

“Before the planning went in for Coolamber we had been working on that and came to an agreement with the council for a temporary Tree Preservation Order. We approached all of the councillors and pleaded our case that the trees are central to the estates and important to the greater Liffey Valley area – thankfully they listened.”
During the vote in council chambers 28 councillors voted for a full Tree Preservation Order for Coolamber, although council management was not in favour of the plan.
John said: “We were infuriated by the arrogance of the planners who suggested that they didn’t believe the trees had any residential amenity and that really annoyed us.
“What is of value to us as residents should be a decision made by us, so that made us steel ourselves a bit more for the battle.”
Independent councillor Liona O’Toole was instrumental in arguing for the Tree Preservation Order in the council.
She said: “As a resident of Finnstown, and having being involved with this tree issue for many years, I was delighted to be able to deal with this issue as an elected representative once and for all. The Tree Preservation Order identifies 11 trees in total which the developer must protect and retain during the construction of the housing development.
“It was clear that local residents, including myself, did not necessarily object to the development of houses on the site, but not at the expenses of mature trees being removed.”
She thanked her fellow Progressive Alliance colleagues and councillors who supported the order being granted.
John told The Echo that residents are pleased with the victory but are still trying to protect other trees in the area from development with submissions to An Bord Pleanála in the coming weeks.