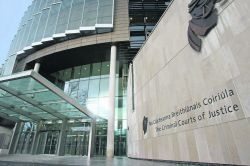 A disqualified driver has been jailed for six-and-a-half years after he killed a “good Samaritan” while drink-driving.

Witnesses stated that Desmond Collopy (29) was showing off and jerking the steering wheel before he struck 50-year-old Eamon Cronin. Mr Cronin had just crossed the road to try and break up a fight and was almost on the footpath when he was hit.
Mr Cronin, a bank official, was described in court as a good Samaritan, a true gentleman and the love of his wife’s life.

Collopy, who had six ongoing disqualification orders over him at the time, never stopped at the scene. He told the back-seat passengers in his Volkswagen Golf that someone had just thrown a bottle at his car.
Collopy, of Landen Road, Ballyfermot, Dublin pleaded guilty at Dublin Circuit Criminal Court to dangerous driving causing death at North Street, Swords on August 16, 2014.
He also pleaded guilty to having no insurance, driving while disqualified and failing to stop his vehicle at the scene of an accident. His 186 previous convictions include 148 road traffic offences and 30 disqualification orders.
Sergeant Adrian Murray told Anne Marie Lawlor BL, prosecuting, that Collopy was seen on CCTV footage that night drinking in various different establishments and drank at least nine pints of lager before drinking cocktails in Swords. He continued drinking in a B&B after killing Mr Cronin.
Mr Cronin’s widow, Jane Fitzsimons, told the court, that her life has changed forever that night. She said she lost the love of her life, her best friend, her lover and her beloved husband of 19 years.
“It is like falling off a cliff and I was still hanging on the edge,” Ms Fitzsimons said.
She said it was the “simple things” that reminded her that her husband was really gone; seeing his toothbrush and razor in the bathroom knowing he would never use them again, the first time she hung clothes on the line and none of them were his, knowing that she wouldn’t hear his key turn in the door again.
She recalled how her husband would sometimes sneak upstairs and “give me the fright of my life”, how they would dance in their stocking feet in the kitchen “just cause we felt like it” and how they would argue over the fact that he had not cut the grass.
She said she would miss his hugs and going outside in the garden to look at the stars with him.
Ms Fitzsimons also quoted her brother-in-law who spoke of how Mr Cronin always had his back as his big brother and was always ready to fight his corner.
She also quoted his work colleagues from Permanent TSB on Baggot Street, who described Mr Cronin as a comedian and their bodyguard, a true gentleman who always had a smile.
Ms Fitzsimons said her life was now lonelier than it ever was and said it had been shattered into tiny pieces.
Judge Martin Nolan told Ms Fitzsimons she had his great sympathies and he hoped she could rebuild her life.
He said there was no doubt that Collopy drove dangerously and that he left the scene of an accident.
The judge said, from maps presented to the court, that Collopy threw Mr Cronin forward about 12.5 meters when he struck him.
“He caused the death of a human being and left a gap in a family,” Judge Nolan commented. He described Mr Cronin as a “good Samaritan” who had earlier been trying to break up a fight.
He noted that Collopy shouldn’t have been driving that night as he had been disqualified many times over and his actions showed “total contempt for road traffic law”.
“His actions have led to the death of a very good man. Many people in this court will be left with a great sorrow for a substantial period of time and he is responsible for that,” Judge Nolan said, before he jailed Collopy for six-and-a-half years and disqualified him from driving for ten years.
Dominic McGinn SC, defending, submitted that Collopy co-operated with the garda investigation, but accepted that he panicked and left the scene.
He described his client’s behaviour on the night as “appalling” but told Judge Nolan he was remorseful and apologetic for his actions.
Counsel said Collopy had to come to terms with the fact that he has taken someone’s life, before he added that his client had written a letter addressed to Mr Cronin’s family and friends.