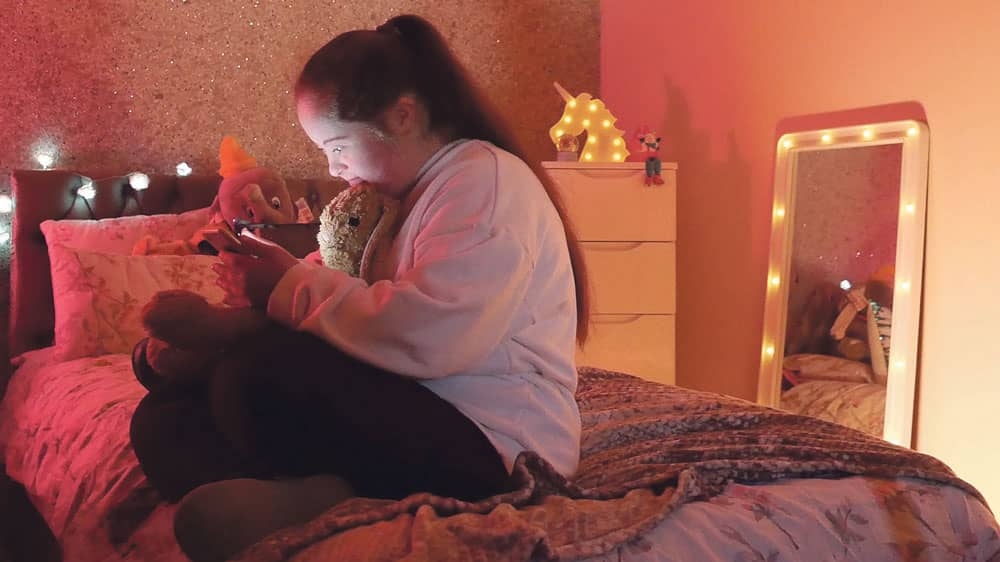 MEET Abbie Stacey, a 17-year-old from Glenshane in Tallaght who has won a Best Young Actress award in the Cannes World Film Festival.

Abbie plays the lead in a 15-minute short film called Wanna Hang Out, a performance which has landed the Mount Seskin Community College student the Best Young Actress in a Short Film award.

Wanna Hang Out also picked up the award for Best Narrative in a Short Film.

The double gong short was written by 18-year-old Cormac O’Toole from Ballymun, who penned the script, which focuses on how vulnerable young people are online.

Abbie, who has Down syndrome, plays a young girl called Beth who accepts a friend request from a stranger, a story line which highlights the dangers young people face online.

In a comment to The Echo, Abbie, who regularly helps out at Tallaght’s Westside Boxing Club with dad Frank, said: “It was a great experience to act in the film…and I can’t wait for the next one.”

Funded by the Ballymun Regional Youth Resource, the award-winning short was made by Bread and Circus Productions – founded by Clondalkin’s Andrew Keogh, who directed Wanna Hang Out.

And the plot thickens with the local links as the film was produced by Jeff O’Toole, from Jobstown.

Jeff, who works alongside Andrew in Bread and Circus Productions, delivers script writing workshops in the Ballymun Regional Youth Resource – where Cormac wrote his award-winning narrative.

The short film was shot between Tallaght and Ballymun and included a crew made up of young people from both areas, and features actor and Tallaght resident Kieran O’Reilly.

Abbie Stacey with her dad Frank

“I’m delighted, delighted for all of the young people involved,” Jeff told The Echo.

“This is Abbie’s first ever film that she has acted in and Cormac’s first script.

“Young people can get a lot of flak, particularly in areas like Ballymun and Tallaght, and this shows that there are good kids out there, talented kids.

“They have been acknowledged on an international stage and we need to focus on that.

“Other young people should 100 per cent take inspiration from this, especially any young person who maybe thinks it’s too far out of their reach.

“If you have a story, and every young person has a story, tell it.

“The technology is in your hands, there are lots of films been shot on iPhones… just get your story down.”

A former student of Mount Seskin himself, Jeff developed an interest in acting and film through an extra-curricular class on film making at the Jobstown school circa 1994.

Highlighting the importance of community in supporting and encouraging young people, Jeff thanked everybody for getting behind the film since the double win was announced in recent days.

“Everybody locally is really getting behind [the film], everyone’s excited about it,” Jeff said.

“It’s just so great for everybody involved, particularly the young people.”

Wanna Hang Out has been entered into a few film festivals at home and abroad, with hopes high to have a charity screening locally in the coming months.